Tamworth looks to the stars for next big thing 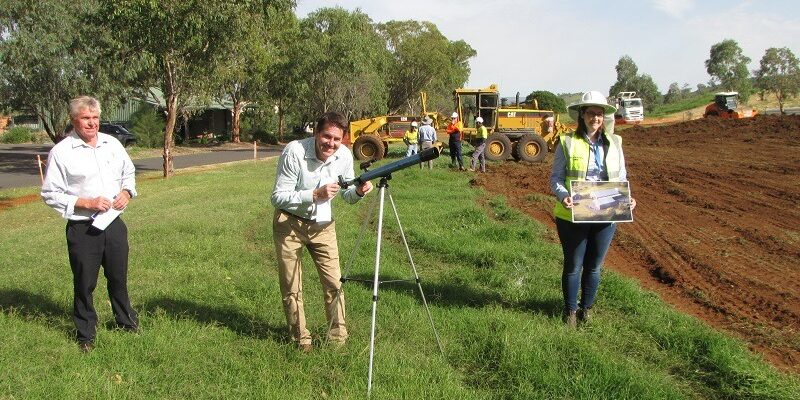 Tamworth’s eye on the heavens is beginning to take shape with earthworks starting for the $1.8 million Regional Astronomy and Science Centre.

NSW Nationals Member for Tamworth Kevin Anderson said the start of construction was great news in the midst of difficult times with tight restrictions imposed on the region in an effort to battle COVID-19.

“The start of construction shows me that it is business as usual, to build attractions for visitors, who we hope will come when this crisis is finally over,” Mr Anderson said.

“Not only will Tamworth be a highlight on the interstellar map, but this is about creating jobs for locals with the council’s civil construction crew doing the earthworks and tenders awarded at the end of the month for the construction of the building.

“This new Regional Astronomy and Science Centre will help Tamworth become a must-see destination attracting thousands of ‘astro-tourists’ looking to the skies for their next adventure.”

The $1.8 million grant will help fund a new observatory with a roll-off roof to house large telescopes, a second observatory also with a roll off roof, to house a historic telescope, a planetarium and an education space for hands-on science programs.

“I want people to come back and visit our regional towns when the end of the pandemic allows life to get back to some normality,” Mr Anderson said.

“Visitors will provide a real boost to our economy – they stay in local accommodation, they buy from local shops, they visit local cafes and eateries and enjoy local tourist attractions.”

“It’s so exciting to know that in about six months’ time we will have a unique tourism and educational facility,” Mr Betts said.

“I have no doubt it will be a drawcard not only for tourists as part of the Inland Astro-Trail but also researchers and astronomers from around the world.

“It has educational benefits for our own community but also potential positive impacts for our local economy though increased visitation by tourists, students and scientists.”

President of the Tamworth Regional Astronomy Club, Leigh Tschirpig, said they were delighted to see the Astronomy and Science Centre project getting underway with the commencement of earthworks at Victoria Park with a planned completion date in October.

“The high levels of interest in astronomy and space in the Tamworth region is absolutely fantastic with the Club’s continued growth to around 80 members since its establishment in late 2015,” Mr Tschirpig said.

“TRAC has been hosting crowds of up to 200 people at the Club’s public viewing nights and regularly receives enquiries from schools, community groups, organisations and residents from across the region about telescope observing evenings and astronomy presentations.”