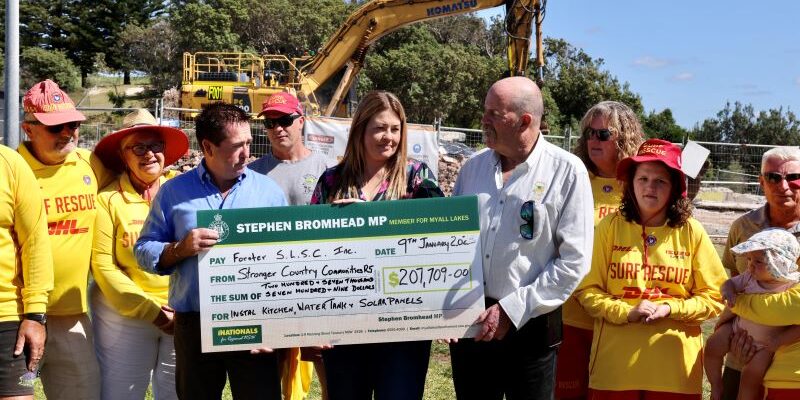 The clubhouse at the Forster Surf Lifesaving Club will get a new kitchen and rainwater tanks, following a $208,000 investment from the NSW Nationals in the state government.

Deputy Premier and Minister for Regional NSW Paul Toole said the funding from Round Five of the Stronger Country Communities Fund will support the work already underway to revitalise the facility for years to come.

“Our surf lifesaving clubs are more than just a building near to the beach – they are the heart of many coastal communities, bringing people together and supporting volunteers who keep us safe,” Mr Toole said.

“The new kitchen will not only benefit members, it will also be used as a function space that can be hired out to the community, generating more funding for emergency services equipment.

“The instalment of underground rainwater storage and rainwater tanks will reduce the club’s water usage, while also making it more self-sustainable.”

Mr Toole said the $160 million Round Five of the Stronger Country Communities Fund is supporting a record number of community investment, including up to $50 million for projects delivered by community organisations.

“Since 2017, our Government has delivered funding for more than 2,500 projects through the Stronger Country Communities Fund, making regional communities even better places to live, work and raise a family.”