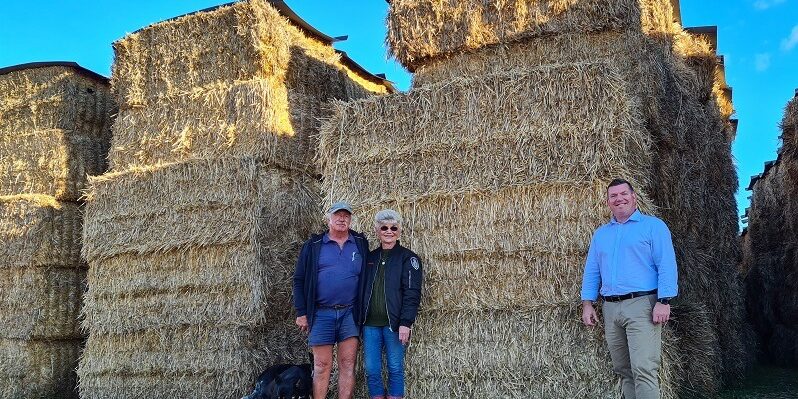 Throughout May trucks carrying a total of 574 tonnes of hay will be rolling into Gollan to help drought-affected farmers, thanks to a $137,000 NSW Nationals in Government Donated Fodder Transport subsidy.

NSW Nationals Member for Dubbo Dugald Saunders said this was part of a broad range of support available to assist farmers and their families.

“Despite recent welcome rain, farmers across this region are still battling one of the worst droughts on record, so the NSW Nationals in Government are doing what we can to support our farmers and regional communities,” Mr Saunders said.

“This includes the Donated Fodder Transport subsidy, which covers the cost of transporting donated fodder where the fodder is arranged by community groups or other organisations for the benefit of multiple drought-affected properties.

“The timing of this delivery to 117 farmers in the Gollan region will help bring a little relief as we head into the colder months, and I want to thank Anne Jones and Peter Perry from the Lions Club District 201N4 for organising this donated fodder.”

Ms Jones said the donated fodder was the “difference between being able to continue or to totally destock”.

“Without the assistance that we’ve actually received from the NSW Government through the RAA, we would not be able to have helped as many people as we have,” Ms Jones said.

To date, the NSW Nationals in Government have provided more than $23 million in Donated Fodder Transport subsidies to support rural communities and community organisations.

The NSW Nationals in Government have a range of grants, subsidies and support services available to assist drought-affected primary producers.

For more information on the more than $1.1 billion drought response package, visit www.droughthub.nsw.gov.au.