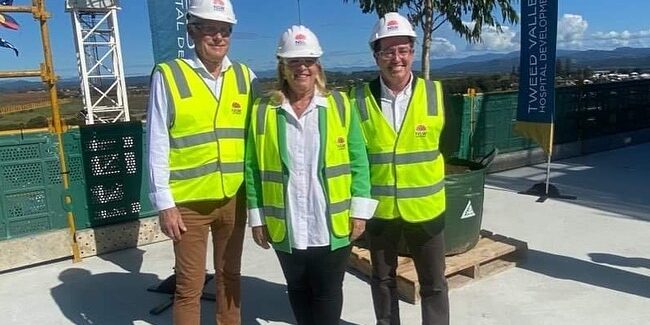 “This is about delivering world-class health facilities and services closer to home to transform healthcare for communities in the Tweed Valley region,” Mr Toole said.

“Today’s ‘topping out’ ceremony is a significant milestone for this incredible new health facility which will double capacity of the existing hospital to better meet the current and future healthcare needs of this community which has grown by 6,000 people since this project was first announced.”

“These services will be a game-changer for the local community, providing treatment locally to ensure up to 5,000 people no longer have to travel outside of the region to access life-saving treatments,” Mrs Taylor said.

“Once complete next year, the new hospital will boast almost 200 more beds and an extra 16 new Emergency Department treatment spaces.”

Nationals Member for Tweed Geoff Provest said in addition to the world-class health facility, construction for the hospital has provided a boost to the local economy, supporting hundreds of jobs since work began.

“As the project moves into the internal fit-out stage, work is ramping up with around 400 people on-site each day,” Mr Provest said.

“Importantly, many of the workers contributing to this project are from the local community.”

The hospital has been designed in close collaboration with staff and the community and will include:

With the hospital reaching its full structural height, construction teams will continue the internal fit-out of the building, services installation and the hospital’s facade.

Construction of the new hospital is on track for completion in 2023.

A new $50 million multi-storey car park will also be delivered as part of the project, providing staff, patients and visitors with access to over 1,200 car park spaces at the new hospital campus when complete. Construction is underway and on-track to open in 2023.

The Tweed Valley Hospital development is part of the NSW Government’s record $10.8 billion investment in health infrastructure over four years to 2024-25, with nearly a third of the spend in this financial year earmarked for regional and rural health facilities.

Since 2011, the government has delivered more than 170 hospitals and health facilities across NSW, with more than 110 currently underway – of those, more than 70 are in rural and regional areas.