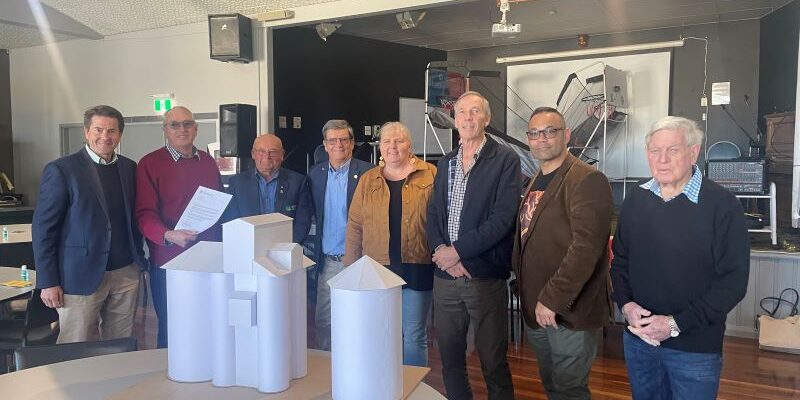 The campaign to have Quirindi join the growing silo art trail has come to fruition with $199,981 provided under the NSW Nationals in the state government’s Infrastructure Grants Program.

Nationals Member for Tamworth and Minister for Hospitality and Racing Kevin Anderson was on hand in the Liverpool Plains to congratulate the Quirindi Silo Art Committee on their achievement.

“The Quirindi Silo Art Committee have spent the last three years working hard to put Quirindi on the map as a tourism destination,” Mr Anderson said.

“Silo art in Barraba and Gunnedah has proven to be a big boost for tourism and Quirindi will soon cash in on that growing tourism dollar, thanks to this project.

“I’m looking forward to joining the Quirindi community to see the silos painted over a seven-week period later this year. This will be a true community event with the artwork slowly revealed for the first time ever, free for everyone to see.”

Nationals Member for Upper Hunter Dave Layzell said he is excited that the Quirindi Silo Art Committee has been able to secure NSW Government funding to bring the artwork to reality.

“The committee has advocated strongly over recent years for this project, and I hope its bid to diversify the local tourism offering through creating a new landmark will reap rewards for Quirindi once the artwork is completed,” Mr Layzell said

Chairperson of the Quirindi Silo Art Committee Ian Carter said the project would be a huge boost for the local community.

“A study done by Griffith University showed the huge increase in tourism and traffic that silo art brings to a town,” Mr Carter said.

“Part of this was to try and give Quirindi a bit of a boost. It’s one of the towns that’s been stagnant or dying slowly and this will hopefully revitalise Quirindi and keep it going which will be great.

“On behalf of the committee, we’ve got it all organised, we’ve chosen the artist, we’ve got the artwork sorted and we’ve got the lightshow people organised so this announcement will create a real buzz in the community. It’s just fantastic.”

“The Silo art project has also had incredible support from the local community and a number of local organisations, and I sincerely thank them for their support, which has been instrumental in getting this project across the line,” Mr Anderson added.