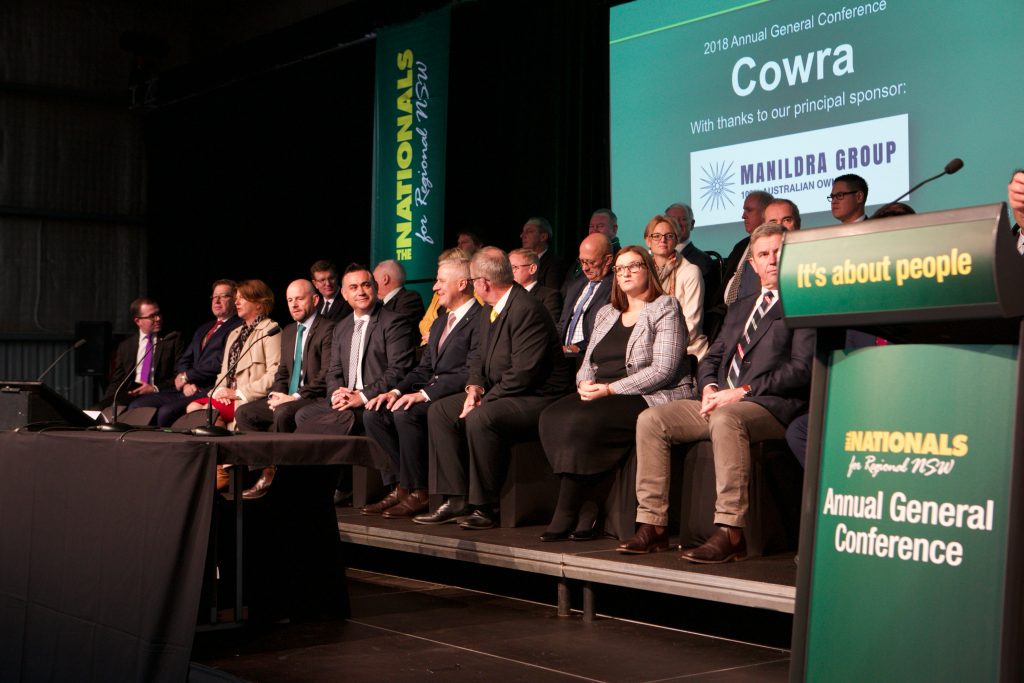 It was one of the coldest weekends in recent history, but the 2018 Annual General Conference was a rousing success, not only for members but also the township of Cowra. The event started with welcome drinks at the Japanese Gardens on Thursday evening, which were not only a warm reprieve from the icy wind but also particularly stunning at night.

On Friday and Saturday, a number of motions were brought forward by branches across the state and while there was some strong debate at times, members were pleased with the quality of motions and the generally friendly and respectful manner that those arguments were put.

“Despite numerous predictions by its detractors, virtually from the day of its establishment, that the Party would fail, it has never been without parliamentary representation in either the New South Wales or Commonwealth Parliaments,” he said. “Rather, as Paul Davey has helpfully compiled, it has returned 185 parliamentarians to the NSW Parliament and 65 to the Commonwealth Parliament, as well as providing nine of the Federal Party’s 14 leaders.”

The softly-spoken leader reflected on the year that was, “a big year” that saw new leadership both at a state and federal level, retirements and by-elections and the citizenship scandal. But he also congratulated the party as a whole for the way it had conducted itself through thick and thin in a sometimes-turbulent 12 months. And with the coming year bringing the State Governments to seek a third term, he said the rebuilding effort after 16 years of Labor inaction had led to a new focus on the people of rural and regional NSW.

Deputy Premier and Party Leader John Barilaro was firing on all cylinders when he took the lectern, pointing out the NSW Nationals had left no part of regional NSW untouched since coming to Government. From slashing the number of coal-seam gas exploration licenses Labor recklessly handed out, to tackling the infrastructure backlogs left across the regions, the Deputy Premier reinforced the goals and re-inspired the people to aim for them

When you’re hurting, we’re hurting, he said, and when things are going well we are there with you, side by side to share in the celebration. Mr Barilaro outlined how in the first term, the Government fixed a broken state and repaired the budget, in the second term it had delivered an infrastructure boom for regional and rural areas, so it was time for a third term that focused on people: Young people who want to find a job and buy a house, and elderly people who worry about heating their homes in winter.

The motions brought forward during the conference were reflective of the heart of the Party; securing public ownership of Snowy Hydro, ensuring power is affordable and available, and backing farmers and communities.
Federal Agriculture Minister David Littleproud took the floor and made an impassioned argument in support of live exports, saying there was a need to safeguard the industry, not bankrupt it. The people who actually care about animal welfare want to ensure there are the right checks and balances throughout the system, not simply shut the system down.
The conference also backed motions that called for securing the state’s electricity supply to protect industry, while looking at emerging technologies to see what if there were cleaner or more efficient ways to generate power.
Former MP Kay Hull spoke strongly about the need for autopsy services at regional hospitals, after cases of families having to wait for weeks before they could bury their loved ones.

Former education minister Adrian Piccoli moved an urgency motion, backed by Police Minister Troy Grant, to expand mandatory reporting laws to include members of the religious clergy and covering admissions disclosed during confession. It was a key recommendation of the Royal Commission into Institutional Responses to Child Sexual Abuse and the conference voted to lead the charge on protecting children from predators.

One of the highlights of the weekend was the gala dinner at the Cowra Show Society Pavilion, which truly is one of the great country halls and a real credit to the town. The always delightful Kay Hull was the master of ceremonies for the evening, while rugby league legend Laurie Daley was the guest speaker, regaling the crowd with tales of playing junior footy with a future Deputy Prime Minister at Junee!

After a great dinner, Member for Tamworth Kevin Anderson took to the stage with is band Splashpool for a rockin’ good time. They were joined by Deputy Premier John Barilaro and candidate for Orange Yvette Quinn for a singalong of “The Horses”, while Deputy Prime Minister Michael McCormack wowed the crowd with his version of “Suspicious Minds”. Yvette returned to the stage to play the flute on “Down Under”, a hidden talent from a promising young candidate.

However, none of the festivities would have been possible without the support of major sponsors the Manildra Group, great friend of the Nationals for many decades, which has grown from a family flour mill in 1952 to a diverse agribusiness that brings the finest Australian food and industrial products to the world. As one of our nation’s largest family-owned companies, Manildra Group has invested more than $1 billion in regional NSW since the late 1980’s and employs more than 1000 people in regional Australia and thousands indirectly. These jobs are highly-skilled and high-paying and based in regional and rural NSW. Manildra Group proudly partners with thousands of farming families to produce 100 per cent Australian-grown and made premium products exported around the world.

A Young Nationals trivia fundraiser was also held at the Lachlan Valley Hotel on the Friday night, raising about $2000 for the party.