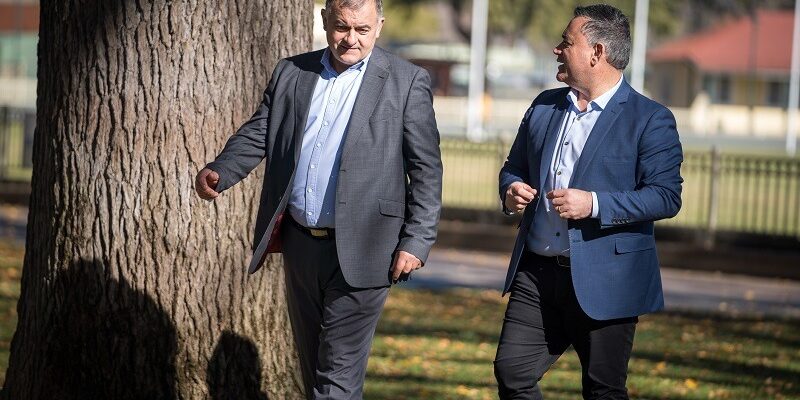 The NSW Nationals candidate for Eden-Monaro, Trevor Hicks, ran an automotive mechanical business in Queanbeyan for 22 years before selling up to spend more time at home on the farm. Find out more about Trevor’s passion for local jobs and opportunities ahead of the July 4 Eden-Monaro by-election.

Trevor Hicks is a local councillor, farmer and former small business owner who believes in delivering more jobs and opportunities for the region.

Like many in the Eden-Monaro, Trevor has seen first-hand the devastating impact drought, bushfire and now a pandemic has had on the region. But he knows that a strong, local champion who gets things done is needed now more than ever.

“We had to sell off our cattle because of the drought, and during summer we lived with the very real threat of bushfires near our home for months,” Trevor said. “I know what it’s like to work hard in a small business. But I also believe in counting your wins, not your losses.”

“I’m determined to fight hard to make sure our region gets every opportunity it needs to succeed.”

Running as the ‘jobs candidate’, Trevor’s number one priority is to create more employment opportunities.

“It is more urgent to create and support jobs now than at any other time in our history,” Trevor said. “The drought, then those bushfires, and now COVID-19 has knocked us around. Eden-Monaro is in the middle of the storm here, but we can turn it around. We can’t afford to let opportunities go by the wayside. We need to take the initiative and get projects up and running so people can get back to work.”

A keen fisherman, hunter and sports enthusiast, Trevor and his wife Julie have raised their three sons in the region. Together, they have instilled the strong country values of working hard and supporting one another through good times and bad. His two eldest boys have become tradesmen – a carpenter and a plumber – following Dad’s example of working with his hands in his Queanbeyan automotive business.

“We’ve joked about our youngest becoming an electrician, then we’d have the set,” Trevor laughed. “Ever since I got that first bridge, the first big roads project, built on council I’ve known we can solve the problems we see every day. You have to be willing to get in and give it a crack.”

“It’s young people who are willing to get in and have a go that we need to support because they’re building our future.”

Trevor has been a part of the wider Eden-Monaro community for most of his life and he knows and understands the issues facing people in the region. Serving on the local council for eight years, Trevor has shown dedication in improving the livelihoods of those who live in the region and ‘going the extra mile’ for his community. Determined to do everything he can to put the people of Eden-Monaro first, Trevor has proven he has the drive to deliver what the community needs and deserves.

“Roads and bridges are a huge issue, and even though there’s been a lot on over the past eight years, I’m proud to say I’ve turned up and done the job I put my hand up for,” Trevor said. “We’ve seen people come along in this seat, stamp their passport and not fight hard enough for locals. It’s our time to shine, we need someone to fight for our fair share, and that’s what I’ll do.”

“I’m a local who’s proven he’ll fight hard for locals, and I want to deliver more and more for my region.”

Deputy Premier, Leader of the NSW Nationals and Member for the state seat of Monaro John Barilaro said the people of Eden-Monaro would benefit from a National Party member in the Federal Government.

“Labor has proven time and time again that they are more focused on ideology than policy and although Mike Kelly was a great local member, his hands were tied by a Labor leadership team that refuses to support the regions,” Mr Barilaro said.

“The city-centric Shooters are no better and have proven that when push comes to shove they will sell out the regions and vote with Labor and the Greens.

“Now is the time to give the Nats a go and elect a local member that is on the side of the government of the day and will fight to make sure the electorate of Eden-Monaro gets their share.”

“Trevor has been a part of the wider Eden-Monaro community almost all of his life and is committed to getting right around this large electorate in the four weeks leading up to polling day,” Mr McCormack said.

“He already knows and understands the issues of this important regional seat and is determined to do everything he can to put the people of Eden-Monaro first.

“The people of Eden-Monaro have suffered through drought, devastating bushfires and now COVID-19. Mr Hicks has proven he has the drive and determination to deliver what the community needs and deserves.

“He is dedicated to improving the livelihoods of those who live in the region and is known for ‘going the extra mile’ for his community right across South East New South Wales.”

Why not say g’day?

Trevor will be out on the road right throughout the campaign, so why not take the time to say hello and tell him what needs to be done in the community?