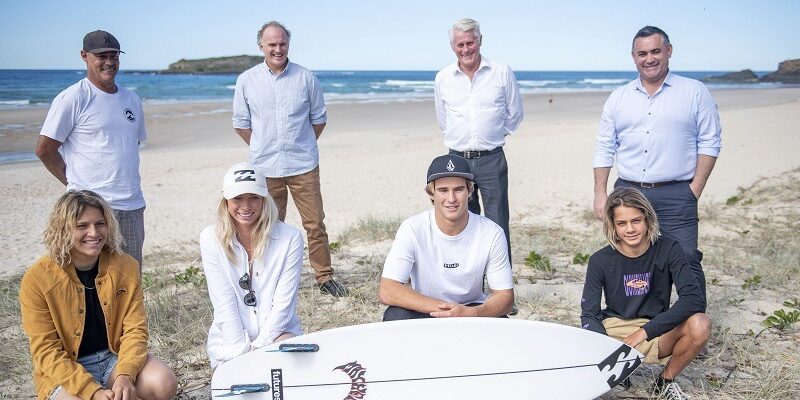 The picturesque Tweed in northern NSW will next month host one of three Australian Grand Slam of Surfing events to be staged across the country thanks to a partnership between World Surf League and the NSW Nationals in the state government.

NSW Nationals Member for Tweed Geoff Provest said the Tweed Coast Pro will be held over two days and will utilise locations at Cabarita Beach or Fingal Head.

“The World Surf League coming to Tweed confirms what locals have always known, that we are home to the best surfing in the entire world,” Mr Provest said.

“The COVID pandemic has really taken a toll on our community which depends heavily on tourism so having the WSL here is a great way of boosting local morale and keeping us on the map.

“Our beautiful coastal scenery and unique countryside will be broadcast globally all while Australia’s best battle it out on our beaches.”

NSW Nationals state leader and Deputy Premier John Barilaro said the Tweed Coast Pro will reignite pro surfing in 2020 as Australia’s top competitors battle the waves to win prize money for a charity of their choice.

“COVID-19 has hit our coastal regions hard, especially the border community of Tweed, and this regional NSW event will stimulate the local economy, give the local community and fans a much-needed morale boost and showcase Tweed to the world,” Mr Barilaro said.

“Sun, surf and sand are a way of life in our regional coastal towns and we need to do everything we can to support the recreational and economic benefits that surfing provides to our beach communities.”

WSL Asia Pacific General Manager Andrew Stark said that the WSL is excited to be running an Australian Grand Slam of Surfing event in regional NSW and getting behind the border area of the Tweed Coast.

“It’s fantastic to secure the Tweed Coast Pro for the recently announced Australian Grand Slam of Surfing and we thank the NSW Government for supporting this important event,” Mr Stark said.

“The community of the NSW Tweed Coast has been heavily impacted during the COVID state border closures, so we want to show our support to the coastal town and its local businesses, and showcase the beautiful waves and surf culture of the region for an exciting new World Surf League event.”

The Australian Grand Slam of Surfing, which will play a part of The WSL Countdown, will see 24 of Australia’s best surfers (12 men and 12 women) go head-to-head in their respective divisions with 10 male CT (Championship Tours) competitors and 8 female CT competitors on standby for each stop, some looking to compete for the first time in 2020.

The remaining spots in each field will be allocated to the highest ranked 2019 non qualifying Australian surfers or selected wildcard surfers.

The Australian Grand Slam of Surfing will run across the nation between September 1 and October 31 and be broadcast live on all WSL Channels including worldsurfleague.com and the WSL Facebook page, Channel 7 (7Plus), Fox Sports Australia (Kayo) and Sky Sport NZ.

The NSW Nationals in the state government will be working alongside the World Surf League and local communities to ensure all Public Health Orders and COVID-safe plans are adhered to.

For more information on this and the WSL Countdown Series, please visit www.worldsurfleague.com or download the free WSL app