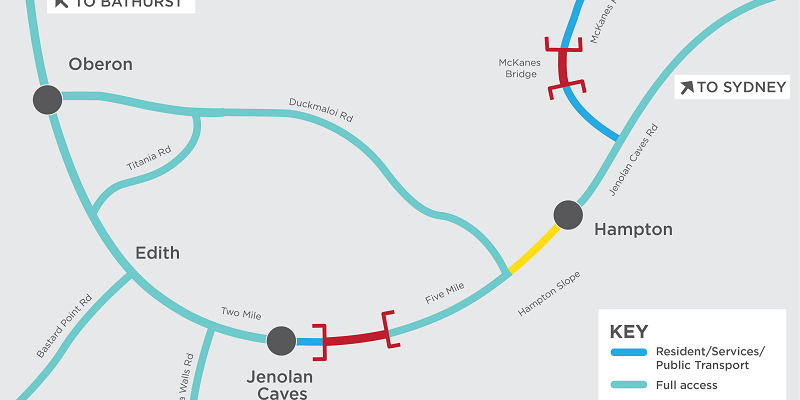 Work is powering ahead to restore Jenolan Caves Road to pre-flood condition, with multiple teams assembled to finalise investigations and slope repair options at Two Mile, Hampton and Five Mile.

“The extensiveness of the repair task is unprecedented. We have needed to turn to international best practice to guide us as there has never been such extensive storm damage on one road in NSW,” Mr Toole said.

Mr Toole said Golder Geotechnical was last month awarded the contract to design the repairs required for the moderate slope failure at the top of Five Mile.

“Work on this section is expected to start in early 2022, once detailed design and environmental assessments are complete. This project is expected to take eight weeks to complete, weather permitting.”

At the main slope failure at Five Mile, specialist engineering firm Aurecon has been engaged to develop design options, with a workshop to shortlist the options scheduled for the end of November.

At Two Mile, a final design for the slope failure between Carpark Two and Caves House was received from GHD in late October and remediation work is planned to start in early to mid-2022 and is expected to take 12 to 16 weeks to complete, weather permitting.

Downslope from the road at Hampton, further investigations and survey work are planned onsite for mid-November.

A contract for this downslope restoration work at Hampton is expected to be awarded in 2022, with work to follow and the road reopened to two-lane traffic in late 2022.

A contract for work to repair a 70-metre section between Jenolan Caves Road and the Blue Lake is expected to be issued by the end of the year, with work expected to take 12 weeks, weather permitting.