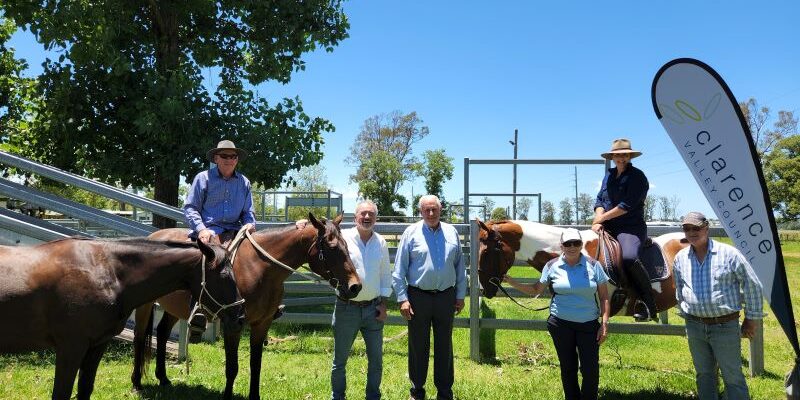 Clarence Nationals MP Chris Gulaptis said flood recovery takes many forms and getting sporting and recreation facilities back up to scratch is a major priority.

Mr Gulaptis made the announcement at Clarence Valley’s leading equestrian facility, Hawthorne Park in South Grafton, in the company of some of the beneficiaries.

“Hawthorne Park, which was used as an animal refuge during the 2019 bushfires, was severely flooded this year,” Mr Gulaptis said.

“The Nationals in NSW Government are providing just under half a million dollars to build better drainage, access roads and seating in a bid to improve the climatic resilience at the facility.”

“There is $384,935 for Barnier Park in Junction Hill which is primarily used for soccer and little athletics and $499,796 for Rushforth Park in South Grafton which is a highly utilised regional sporting facility and home to four soccer clubs,” Mr Gulaptis said.

The Lower Clarence has not missed out with the Yamba Sports Complex securing more than $100,000.

“This project includes the design and construction of suitable field drainage for the rugby league field for climatic resilience,” Mr Gulaptis said.

Clarence Valley Mayor, Cr Ian Tiley, said the funding from the NSW Government towards the four sport and recreation facilities is greatly appreciated by Council and the wider community.

“Sport and recreation activities in the Clarence Valley were significantly impacted by storm and flood events earlier this year, and these upgrades will greatly reduce the time these facilities are out of action following similar events in the future.”