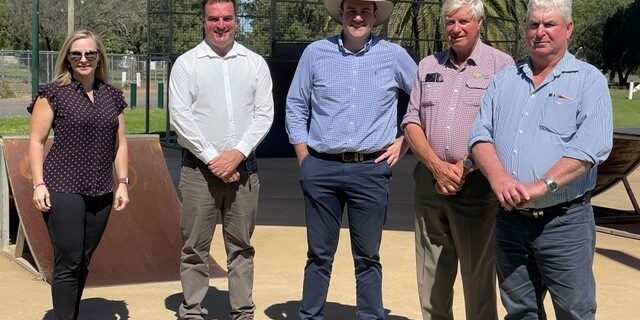 The Bogan Shire will soon benefit from infrastructure improvements and programs that help the community thrive, thanks to the NSW Nationals in the state government’s $75 million Resources for Regions Round Eight.

Parliamentary Secretary to the Deputy Premier Sam Farraway has announced three projects for the Bogan Shire, which will deliver major infrastructure improvements.

“The funds will allow Bogan Shire Council to construct new female change rooms for both the home and away teams at Larkin Oval that will further enhance the sporting opportunities for female athletes right across the Bogan Shire,” Mr Farraway said.

“Resources for Regions Round 8 will see upgrades to O’Reilly Park in Nyngan to include a new playground, an upgraded skatepark and the resurfacing of two netball courts which will enhance the experience for the whole community.

“The new residential subdivision in Nyngan, including upgrades to the sewerage, will help relieve the housing shortage across the Bogan Shire as well as attracting more families to the region.”

Deputy Premier and Minister for Regional NSW Paul Toole said Resources for Regions has been highly successful with Rounds One through to Seven delivering 149 projects worth $345 million to mining communities since 2012.

“Mining plays a very important part in the NSW economy, supporting tens of thousands of jobs across the state and it will continue to play a role in Western NSW for years to come, which is why we’re investing in the future of mining regions,” Mr Toole said.

“The NSW Government is committed to supporting regional mining towns that supply our state with the precious resources, and I am grateful for Bogan Shire Council putting forward these projects which will support the ongoing prosperity of the local community.”

For more information, go to: www.nsw.gov.au/resourcesforeregions