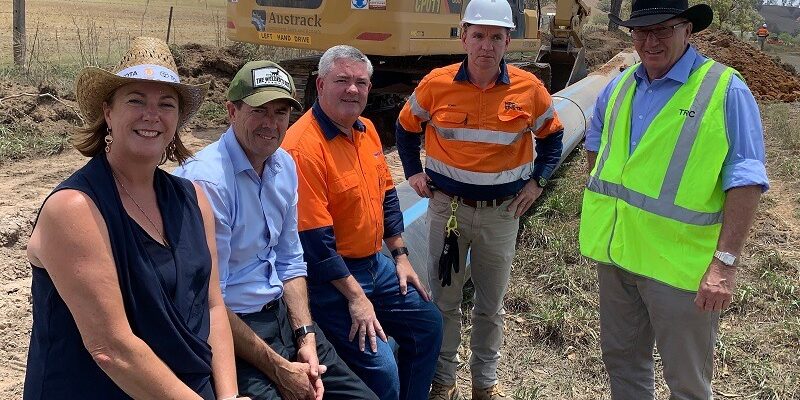 The NSW Nationals in Government’s priority project in Tamworth has recently hit its first milestone with around 8.5km of pipework completed since November between Chaffey Dam and Tamworth.

In Tamworth this week, Minister for Water, Property and Housing Melinda Pavey alongside Member for Tamworth Kevin Anderson said that the project had been fast-tracked as a Government priority and is now a third of the way complete.

Last year we passed legislation which gave us the powers to prioritize projects across the state, including the Chaffey to Tamworth pipeline project, in order to help with securing water for the local communities suffering from the worst of the drought impacts.

Currently the project is almost half complete, with almost 8.5km of pipeline built since work began in November last year. Once complete, the 18.2km pipeline will connect the dam to Tamworth via the existing Dungowan pipeline.

Mr Anderson said 30 Tamworth businesses had been involved in supplying goods or workforce to the project which is scheduled for completion in April.

This is great news for our home-grown businesses. We are facing an unprecedented drought and we need to get money moving within our local communities.

Projects like this pipeline are giving our local businesses a chance to tender for this important work and give workers a chance to be part of a real game changer for Tamworth.

This project would have taken years, but thanks to the legislation that the Nationals introduced last year, Tamworth will have secure water by April.