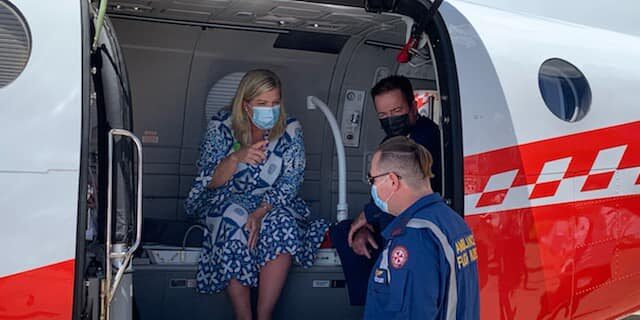 Five state-of-the-art NSW Ambulance aircraft are taking to the skies across the state, providing even better care for rural and regional areas.

“These aircraft are like hospitals in the sky, and they can get to some of the most remote regions of the state and land at both commercial airports and smaller runways,” Mr Toole said.

Nationals Minister for Regional Health Bronnie Taylor said the brand new fleet of Beechcraft King Air 350C planes would be operated and maintained by Pel-Air under a 10-year contract.

“This new fleet will be an absolute gamechanger, offering the technology, comfort and fuel efficiency never before seen in a NSW Ambulance aircraft,” Mrs Taylor said.

NSW Ambulance Commissioner Dr Dominic Morgan said the medical fit-out on-board was tailored to the clinician’s needs and could pick up more than 6000 patients every year.

“Our flight nurses, doctors and pilots are among the best in the country and they helped in the design of what is essentially their office. Their expertise and some of the best planes available means it is a perfect fit for everyone, especially our patients,” Dr Morgan said.

Executive Director of Aeromedical Operations Dr Sarah Coombes said NSW Ambulance was proud of what it had achieved together with RFDS.

“For 19 years, the RFDS has been there working with NSW Ambulance to provide the best for the community of NSW. We thank them for their remarkable and ongoing contribution to health in this state,” Dr Coombes said.