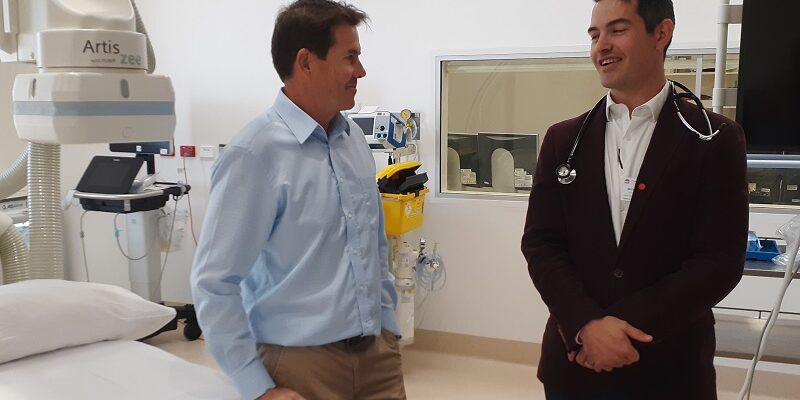 NSW Nationals Member for Tamworth Kevin Anderson said the launch of Tamworth Hospital’s new Pacemaker Insertion Service is a huge win for the region, saving cardiac patients a trip to Newcastle for the lifesaving intervention.

Mr Anderson said patients usually spend up to five days in Tamworth Hospital’s cardiac care unit waiting to be accepted at Newcastle’s John Hunter Hospital to have their pacemaker inserted. They’re transferred to Newcastle for the relatively quick procedure and discharged to return home, which may be up to seven hours’ drive.

“Now, some patients from the New England North West can make a comparably short trip to Tamworth to have their pacemaker implanted and tested. If they’re well enough, patients can return home the next day. The new service will care for about 50 patients this financial year,” Mr Anderson said.

The service started with the expertise of cardiologist Dr Michael McGee who joined Tamworth Hospital from John Hunter Hospital in early 2020. Dr McGee brought with him a winning combination – an impressive cardiology skill set and a commitment to improving the cardiac health outcomes of Aboriginal people and people living in rural communities.

Dr McGee is the service’s linchpin, but he was quick to recognise the huge volume of support the service has received from across the district.

“It’s been a team effort and I want to thank the district including the Tamworth Hospital executive, physician group and the John Hunter Cardiology team for their support, “ Dr McGee said.

“Of course, I’d like to offer a special thank you to the Tamworth cardiac cath lab staff without whom, none of this would be possible.”

“We know Aboriginal people are less likely to agree to care if asked to travel a long way from home, so we work hard to provide specialist services in Tamworth, making them as accessible as possible for patients across the New England North West. I’m pleased we can now offer pacemaker insertion to that list of services.

“We also know John Hunter’s pacemaker insertions have increased by 18 per cent in the past four years, due to our district’s ageing population, and it’s likely the need for pacemaker services will only continue to grow in coming years.

“I’m so pleased Tamworth’s cardiac cath lab staff, in collaboration with Dr McGee, are now able to offer this service much closer to home for people living north of Tamworth.”

Mr Anderson said the new service will save time and money, and greatly reduce disruption for patients and their families.