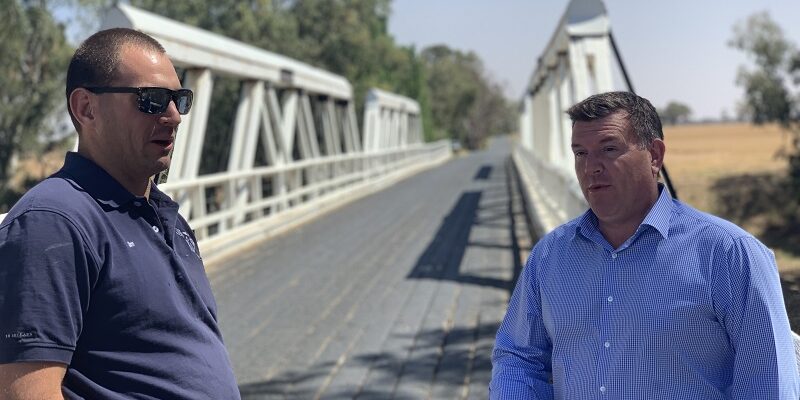 Plans are powering ahead for a new $12.5 million bridge to replace the ageing timber truss bridge at Rawsonville, west of Dubbo.

Nationals Member for Dubbo Dugald Saunders said the new bridge will be built before the existing bridge is removed to minimise the impact on the community.

“The majority of the community told us during consultation they wanted a new bridge and we’re happy to say plans are on track to build a new, concrete bridge about five metres upstream from the existing one,” Mr Saunders said.

“Investigations are continuing for the environmental assessment, which will go on display later in the year, along with the concept design, providing the community with an opportunity to provide further feedback on the project.”

Nationals Minister for Regional Transport and Roads Paul Toole said the new Macquarie River crossing was funded under the NSW Nationals in the state government’s Bridges for the Bush program and would replace the existing bridge which was in poor condition and no longer suitable for heavy vehicles.

“The original bridge was built in 1916 and has served the community well, but the replacement bridge will future-proof this crossing by increasing load capacity, improving safety and reducing ongoing maintenance costs,” Mr Toole said.

“We will keep the community informed about the project every step of the way to allow them the opportunity to have their say as the new bridge takes shape.”

For more information on the project, visit nswroads.work/rawsonville