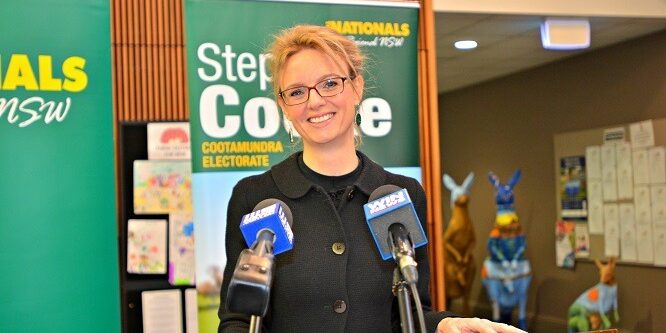 NSW Nationals Member for Cootamundra Steph Cooke has announced the approval of a new $130 million solar facility to be built near West Wyalong, paving the way for construction to begin.

Ms Cooke said the 100 megawatt solar farm will generate up to 150 jobs during its construction, and create clean, renewable energy to power about 37,500 homes.

“The Wyalong Solar Farm will add to the growing hub of solar energy projects in the Riverina, bringing a fresh boost to the economy and diversifying industry for the region,” Ms Cooke said. “This is a fantastic project for Bland Shire which demonstrates the NSW Government’s commitment not only to job creation and economic growth, but also to renewable energy generation. The Cootamundra electorate is ideally placed for the generation of solar power and we are becoming the go-to location for this growing industry.”

“I’m delighted that we are able to tick another box for investment and clean energy.”

Planning and Public Spaces Minister Rob Stokes said the NSW Government has approved 26 solar projects across the State since 2017, providing about 4500 construction jobs and supporting about $5 billion investment in regional and rural NSW.

“These solar projects have already contributed to communities throughout the Riverina and are also supporting the creation of a thriving renewable energy industry in NSW,” Mr Stokes said.

Energy and the Environment Minister Matt Kean said the Wyalong Solar Farm will help NSW meet its target of net-zero emissions by 2050.

“We are committed to delivering affordable and reliable energy for the people of NSW, while also reducing emissions and acting on climate change,” Mr Kean said. “The Wyalong Solar Farm has the potential to save up to 212,000 tonnes of greenhouse gas emissions, reduce overall emissions and put downward pressure on prices. We have a booming solar industry in NSW, which will become a vital part of our energy mix as we transition to a cleaner, more sustainable energy future.”