Mudgee region up in lights 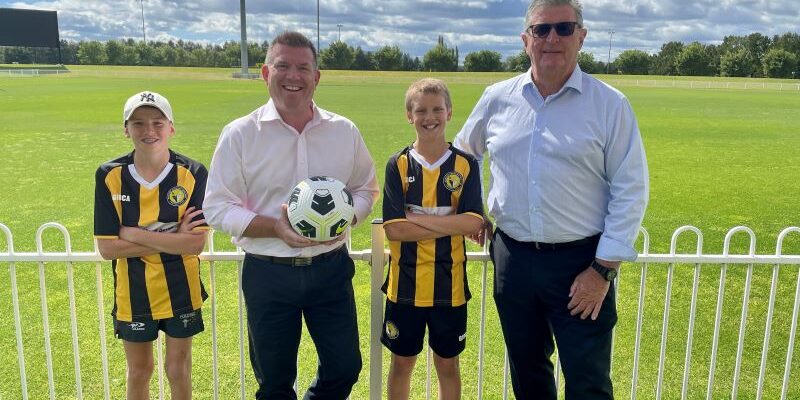 The Mudgee region’s status as a premier sporting destination has received a massive boost thanks to the NSW Nationals in the state government’s Resources for Regions program.

“Glen Willow is already recognised as one Australia’s best regional grounds, hosting NRL and A-League premiership matches, and this funding will take it to the next level,” Mr Saunders said.

“Under the new, 1400 Lux lights, Glen Willow will be able to host televised evening games which attract bigger audiences, meaning even better promotion for the Mudgee region!

“Whether it’s soccer or NRL, these games generate millions for the local economy, and encourage the next generation to stay active which we know is priceless,” Mr Saunders said.

“I have no doubt there’ll be a future Tim Cahill or Sam Kerr in the crowd here at Glen Willow when the Mariners return in 2023!”

“Local football fans will no doubt share our excitement to see the return of the A-League to Mudgee next year, thanks to this funding from the NSW Government,” Cr Kennedy said.

“As part of an ongoing partnership with the Central Coast Mariners, Council was scheduled to host a home game in October, however this had to be relocated due to floods. We’re working with the club and A-League and hope to confirm the 2023 date soon.

“A-League games can generate in excess of $1 million for the local economy, likewise an NRL game can generate up to $2.5 million, however it’s essential these fixtures can be televised.

“Today’s funding announcement means Council can upgrade lighting at the Glen Willow stadium to ensure it continues to meet broadcast requirements and in turn can continue to attract these major sporting events that so greatly benefit our community and economy.”