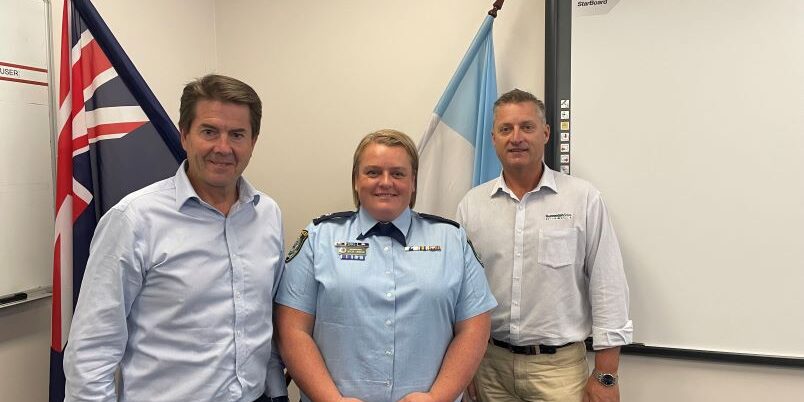 Mr Anderson said Gunnedah will soon welcome a crime investigator, 2 rural crime officers, and a part-time administration officer to support uniformed officers with administration and phone calls to the station.

“These are specialised positions that will be based at Gunnedah Police Station, and it means that the town’s general duty police officers will be freed up for patrols, increasing their presence on the streets of Gunnedah,” Mr Anderson said.

“It is also great news for the Tambar Springs community that an officer has accepted the position there and will be on the ground in town soon.

“Gunnedah has policing for 20 hours a day and while we will continue our push for 24-hour policing into the future, these new police will have an impact in the short term and help to address current issues.”
Councillor Chaffey said he was encouraged to hear first-hand that the Western Area Commander and Oxley Police District Superintendent were passionately committed to working with the Gunnedah police force and the community in dealing with the surge in crime.
“On behalf of the Gunnedah Shire community, I welcome this immediate action to increase the available police work force in Gunnedah to support our existing hard-working team,” he said.
“I look forward to seeing these increased resources drive down the surging rate of crimes, such as theft of motor vehicles and break-and-enters. However, we’re still only partway there, and on behalf of the community, we will continue to call for 24-hour policing and the increased police presence that it will bring.”
Mr Anderson also encouraged the community to assist local police by keeping their belongings safe.
“A simple way to drive down crime is to make sure we lock our doors and our cars. Up to 60% of people in regional NSW leave their cars unlocked at night and locking our cars is a simple way to prevent crime.
“A consistent message to the community is in an emergency, always ring 000,” Mr Anderson concluded.