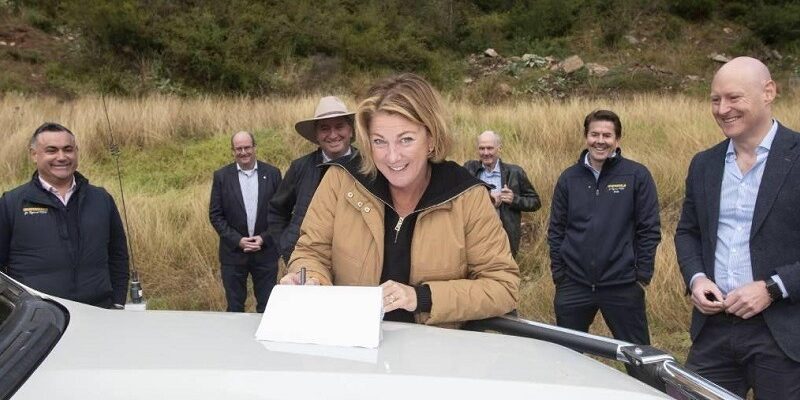 It’s been more than 30 years since the last dam was built in our state, but just a few years after widespread flooding NSW is in the grips of drought. NSW Nationals Water Minister Melinda Pavey spoke to Alan Jones on Tuesday morning about how the party has been working hard to build more dams.

Jones: NSW hasn’t had a new dam since 1987. We’ve had major droughts in New South Wales and Queensland but remember it’s only two years ago that the whole of northern New South Wales was covered in water inches deep, it’s not harvested. So when the drought breaks we’ve got floods. None of the water is harvested and of course in all parts of Australia – over in the Kimberleys it goes to the Indian Ocean, up in the northwest of Queensland it goes off into the Gulf of Carpentaria, in the northeast of Queensland it goes off into the Pacific Ocean, billions and billions and billions of litres, then of course in the Clarence River basin it all spills out. Well I’ve got to give a rap to Melinda Pavey, a good lady, though perhaps not a well-known bush MP. She’s got the bush all over her and she’s got ability, Melinda Pavey, the National Party, she is the Minister for Water. And they’ve actually committed now to three water infrastructure projects. The Dungowan Dam, which will ensure a long-term water supply to Tamworth, the Wyangala Dam which is in the state’s Central West, which will drought-proof the Lachlan Valley, and an investigation into a third dam on the Mole River in the Northern Tablelands. Now Melinda won’t mind me saying while she’s on the line that it’s not enough, but it’s a start. Melinda good morning.

Jones: Thanks for your time.

Ms Pavey: And maybe talking till you’re blue in the face has actually worked – three new dams in NSW.

Ms Pavey: It has, it has. And like you, I grew up on a dairy farm and I’m reflecting on that hard work, I know that drives you every day, how hard your parents worked and the work that you put in. You deserve some credit for these dam announcements as well. And we’re doing more than announcing – we’ve now got delivery partners because it’s been so damn long since we’ve built a dam in New South Wales, we’ve had to outsource a lot of planning and technical work. We don’t have the expertise within the government now so that was our announcement yesterday. But we’re getting on with the job and I know that it’s probably not gonna be fast enough for you, you’d like it done tomorrow, but we’re well on the way and we’ve got the money that John Barilaro, our Nationals Leader, has secured.

Jones: Yes Barilaro. You and Barilaro have been outstanding in all of this. See Melinda, if we start with the wider principle here it’s axiomatic, isn’t it? It’s just common sense. If we’ve got some of the best agricultural land in the world, if we could go as Terry said west of the Great Dividing Range, if we could water that land, we could feed Asia. The opportunities are enormous, aren’t they? And yet we build an Alice Springs to Darwin railway line and we’ve got nothing to put on it. If we actually built dams and gave farmers access to water, and you and I know they’d actually pay for it if they could be guaranteed regularity and reliability of supply, as I said we could feed Asia. The potential for economic growth is absolutely unbelievable, isn’t it?

Ms Pavey: It absolutely is Alan, but I’m in New South Wales, I can manage that. Yes, there are exciting schemes that can be considered in Queensland, the Northern Territory, but we’ve got to get on with making more security of water supply in New South Wales. I mean one of the big challenges, I mean as you said – 2016 our state was awash with water and three years later we’re still only at 14 per cent water supply at Tamworth, Wyangala Dam is down 14 per cent, and we’re at a very real risk of losing our rice industry in Australia. Currently… we can supply all the rice that Australia needs, but currently, we’re only supplying about 10 per cent because we don’t have enough general security allocations along the Murray. And everybody wants rice manufacturing. Everybody loves the fact that we are the world’s best ricegrowers. We’ve actually… our technology and what we’ve taught people around the world about how to grow rice is saving water around the planet. And we want food security. Yes, we export 70 per cent of what we grow and we could do so much more, but we’re also threatened with rice because Vietnam and Thailand at the moment are shoring up their own supply chain.

Jones: Quite right there’s always someone out there doing it. I mean as a bushie you know it must sicken you. And you can’t comment because politically you’d be in trouble. But I mean when you think that we’re pouring money, water, into the environment or the ocean under the guise of the Murray-Darling Basin Scheme and it’s flowing past farmers who are the productive centre of Australia and they can’t have access to it. It’s just nonsense, isn’t it?

Ms Pavey: Well I also think the dams can be good for the environment.

Jones: Of course they are.

Ms Pavey: We wouldn’t be having flows on the Lachlan River, we wouldn’t be having flows on the Peel River currently if it wasn’t for our dams. You know so they’re not mutually exclusive, they can actually help each other and we do want Yellow Tail, we want, you know, fresh Australian fish, and want to get the carp out of the river system through the western parts of New South Wales, but we can do that, farmers want to do that as well, it’s not mutually exclusive. It is the environment and it’s industry and its capacity and it’s not sleepwalking to megacities on the east coast of Australia. It’s growing our regional cities in our communities. We’ve had the pleasure and have been blessed to grow up in those towns and those communities Alan and we know what they offer. And we know it’s tough and the challenges that people have living in Sydney and getting around Brisbane or wherever we just know what quality of life a good regionalised Australia…

Ms Pavey: That’s right, Alan. We’ll start construction, getting ready, the preparatory work with a pipeline at Dungowan and moving a Reflections caravan park at Cowra. It’s all happening, guns blazing, it does take some time but we’re getting there.

Jones: Good on you.

Ms Pavey: And you can take your hat off too and thank you.

Jones: You’re very kind. Thank you Melinda we’ll keep in touch. There she is, Melinda Pavey from the seat of Oxley, the NSW Water Minister.

Another round of funding Build Better Regions
15 Jan, 2021