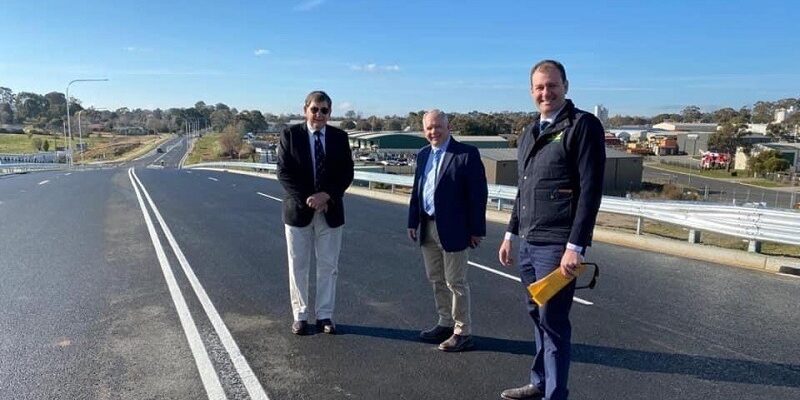 The first vehicles have driven over the new Southern Feeder Road’s railway overpass bridge in the Central West thanks to the Nationals in Government.

NSW Nationals Upper House MP Sam Farraway was there to cut the ribbon and said the $18.4 million dollar project had received significant support and contribution from the NSW Government with over $8 million coming from two different streams of State funding.

“The work being done here on Southern Feeder Road is why funding programs such as Fixing Country Roads are so important,” Mr Farraway said.

“These upgrades, like the overpass vehicles are now driving over for the first time, provides a more direct route for heavy vehicles travelling from the Mitchell Highway to the southern industrial area, which will benefit mining, agriculture, forestry and manufacturing by creating easy, safe and direct access for large vehicles.

“Opening this road here, just a week after announcing a further $16 million in funding for roads across Orange, it is just great to see investment from the NSW Government making our regions roads safer, ensuring everyone can get from A to B and home again.”

“I’m delighted we can partner with other tiers of government to deliver significant boosts in local infrastructure,” Cr Kidd said.

“As well as making it easier for traffic to get from the highway to the Leewood industrial estate and the health precinct, the new bridge will make it a lot easier for residents of Glenroi to get to sportsgrounds, the hospital and the route to Cadia.”

NSW Nationals Minister for Regional Roads and Transport Paul Toole said that the completion of this project was a testament to the importance of the Government funding programs for regional roads.

“Fixing Country Roads is about moving freight more efficiently supporting jobs, economic growth and productivity across regional NSW by reducing the cost of getting goods to market. Now more than ever this is vital for the future of our regional communities like Orange,” Mr Toole said.

“As Minister for Regional Roads I understand the great burden safety upgrades can have on Local Government and to see a project of this size completed and that the NSW Government could be a major player in making it happen, is fantastic.”