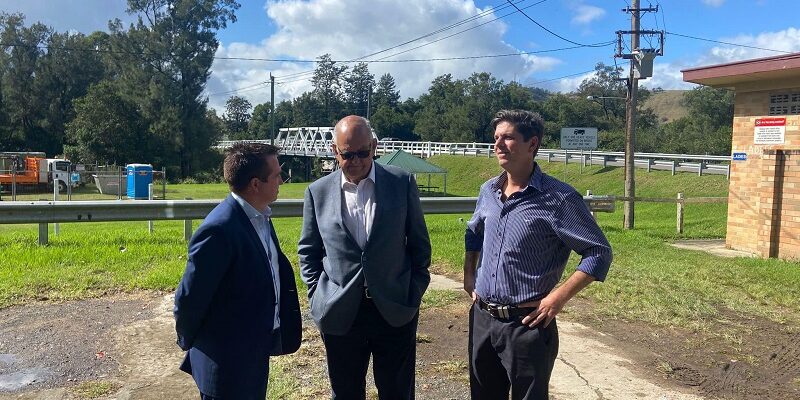 On Friday, Deputy Premier John Barilaro and the Minister for Regional Transport and Roads Paul Toole visited Dungog to announce a $25 million funding package to help Dungog Shire Council get local roads back into shape.

“This is fantastic news for Dungog and everyone who lives over this side of the electorate,” NSW Nationals Candidate for Upper Hunter Dave Layzell said.

“The community has had to put up with crumbling roads on the back of drought and floods and it’s great to see the Nationals in Government continue to fulfil their election promise to fix local roads in our region.”

Under the previous Labor Government, responsibility to maintain more than 100 kilometres of roads were dumped on Dungog Shire overnight, resulting in a huge hit to the local budget.

Mr Barilaro said the funding was about giving the community safer roads, which was what it rightly deserved.

“We know the roads across the Dungog Shire are not up to standard and a reliable road network is essential for a thriving region, which is exactly why we are delivering this funding, to ensure a safer and stronger Upper Hunter,” Mr Barilaro said.

“The NSW Government is reclaiming the management of thousands of kilometres of roads across the state to take the onus off councils and put it back on the government.

Mr Toole said in the past 12 months alone, the NSW Government had invested more than $21 million in projects on Dungog’s local road network.

“Only last week, I was out near Vacy to see work underway on Summer Hill Road – one of four road upgrades we’re funding with more than $5.4 million from our Fixing Local Roads program,” Mr Toole said.

“In the coming months, locals will also see work get underway on the first four of 23 ageing timber bridges on the local road network that will be replaced with modern structures that meet the community’s needs thanks to more than $16 million in funding through our Fixing Country Bridges program.

“Since 2011, the NSW Government has invested more than $100 million into better roads and bridges right across the Dungog Shire.

“We know how important good local roads are in getting families to work, to school, to the shops and home again safely – and we’re working with council to deliver a safer, stronger road network that delivers on the needs of Dungog now and into the future.”

Priorities for upgrades under the $25 million package will be determined by Dungog Shire Council in consultation with Transport for NSW.

Federal Nats chair honoured for service to the community
15 Jun, 2021

Nats in government provide more than $100 million to remediate mine sites
15 Jun, 2021