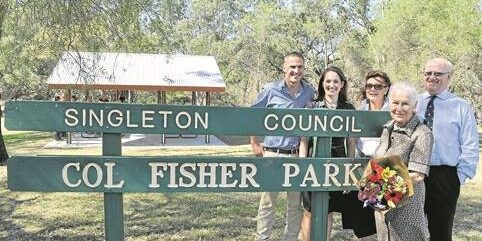 Nationals Member for Upper Hunter, Dave Layzell, has congratulated Adrienne Fisher who celebrated her 100th birthday over the weekend.

Mrs Fisher is the wife of late former Upper Hunter MP, Colin Fisher OAM, who held the seat for the Country Party and The Nationals between 1970 and 1988.

“Becoming a centenarian is an amazing achievement and I’m sure many people across the Upper Hunter electorate would join with me to wish Mrs Fisher many happy returns on this momentous occasion,” Mr Layzell said.

“I especially want to pass on my family’s best wishes to Mrs Fisher with my wife Rachel’s grandfather, Geoff Gowing, having been Col Fisher’s campaign manager.”

The CRS acknowledged the support Mrs Fisher gave her husband during his time in public office and the contribution that she made individually in the Upper Hunter electorate.

Mrs Fisher was actively involved in the community and served as an office bearer of organisations in the Singleton district including the Country Women’s Association, the Women’s Guild of her church and the local Parents and Citizens Association.

“I wish Adrienne Fisher good health and an abundance of happiness with her family and friends for the future,” Mr Layzell said.