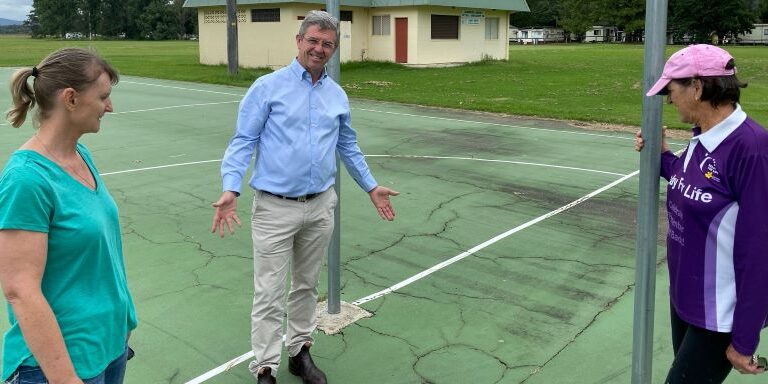 The NSW Nationals in the federal government are backing a big year for Gloucester sports clubs, including Gloucester Netball, Gloucester Hockey, and Gloucester Soccer.

Federal funding of $300,000 will see the Gloucester netball courts resealed, starting from next Monday, February 7.

“I’m pleased to announce the start date for the resealing of the three courts,” Dr Gillespie said.

“Finally we’ve got action after delays to Council’s work schedule because of Covid. These upgrades are going to be transformative and will mean the courts will be ready well in time for the competition in school terms two and three.”

Gloucester Netball treasurer Tonya Channon said all members were excited to see the improvements from next week.

“Normally as school starts, we would be running our twilight comp, but this will be postponed until later in the year. It will be brilliant to be using the new courts for the Saturday competition through Winter. You won’t miss them; they’ll be bright blue,” she said.

“It’s great we can support such an historic and successful local sporting club,” Dr Gillespie said. “Gloucester Hockey has been up and running since the 1950s and now boasts about 70 members across their seniors and juniors.”

“We’re looking forward to a great year. Our club is doing well in terms of getting locals up to representative level; we’re punching above our weight,” Mr Keen said.