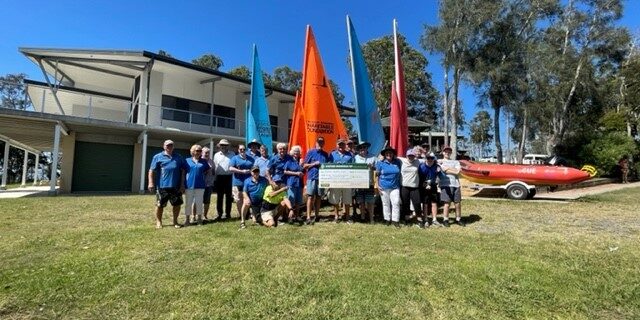 Coomba Aquatic Club on Wallis Lake has been granted $108,500 from the NSW Nationals in the state government’s Stronger Country Communities Fund.

Nationals Member for Myall Lakes, Stephen Bromhead, said the Round Four funding is for the bitumen sealing of the club driveway, with the work to complete the state of the art facility.

“The previous driveway made the facility difficult to access particularly in bad weather. Once the new driveway has been sealed, more people will be able to easily access this world-class facility in time for the NSW State titles which will take place in mid-March this year” Mr Bromhead said.

“$124,950 from Round Three of the Stronger Country Communities Fund and $1.2 million from the Regional Sports Infrastructure Fund has enabled construction of the facility which will continue to attract national, regional, State and club disability sailing regattas on the shores of Wallis Lake.”

Coomba Aquatic Club Secretary Stuart Silver said the Stronger Country Communities Funding will allow them to continue to grow the club, which currently has more than 150 members.

“The club has been going for 28 years and there’s been steady growth over that time with a combination of the new clubhouse, the boat shed downstairs and the car park” Mr Silver said.

“The roadway will be the finishing touch to the whole project and with that in place the future looks very bright.”

The funding for Coomba Aquatic Club is in addition to a funding boost for Old Bar Cricket club and Bulahdelah Soccer Club, with more than $3 million from the Stronger Country Communities Fund going to sporting and community groups in the Myall Lakes.

Deputy Premier and Minister for Regional NSW Paul Toole said 435 projects across every single one of the State’s 93 regional Local Government Areas (LGAs) would receive funding.

“The Stronger Country Communities Fund delivers guaranteed investment in every single regional LGA in NSW, and has seen $500 million invested across more than 1900 local projects since 2017,” Mr Toole said.

The Stronger Country Communities Fund is part of the $2 billion Regional Growth Fund, which alongside the $4.2 billion Snowy Hydro Legacy Fund is delivering infrastructure and programs that generate opportunities, investment and jobs.

For more information, go to: www.nsw.gov.au/SCCF.