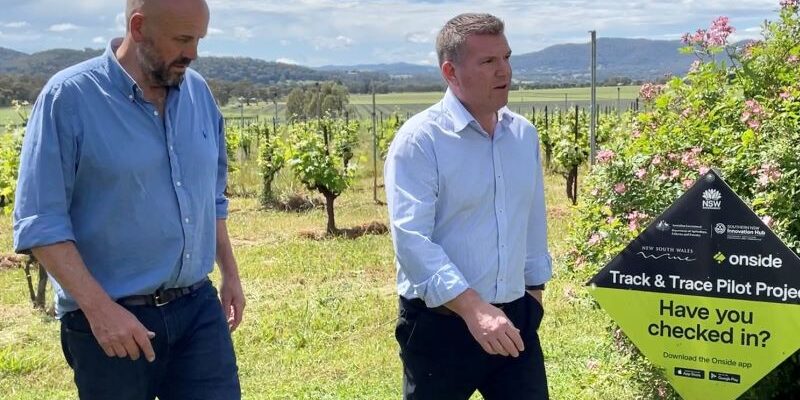 Wine producers across NSW will test a new vineyard management app to strengthen the industry’s ability to respond to biosecurity threats.

Minister for Agriculture and Member for the Dubbo electorate Dugald Saunders said the Track & Trace pilot project will be carried out in Mudgee, as well as Orange, Tumbarumba and Canberra.

“Under the pilot, wineries will download the Onside app to collect and store movement data for their property,” Mr Saunders said.

“We will then put the app to the test by running a mock simulation exercise, based on a phylloxera plant incursion, to see if the data improves our ability to respond to the potential threat.

“This technology could be a game-changer when it comes to keeping our State’s viticulture safe, and if successful, could be rolled out across other primary industries.

“We want to leave no stone unturned when it comes to biosecurity, which is why the NSW Government has invested $229 million in biosecurity this year alone – the biggest investment in exotic pest and disease control by a single jurisdiction.”

“Sound traceability is key to being prepared. If a new threat is discovered, we need to be able to trace back to determine where it came from and trace forward to determine other locations which may be affected,” Mr Bourne said.

“We will measure and rate its ease-of-use in delivering biosecurity compliance for wine producers and the industry. This pilot aims to deliver a solution that makes biosecurity management efficient, simple, and effective.”

The Onside app aims to streamline biosecurity compliance for producers making this process easier to manage.

Onside CEO Ryan Higgs says he’s excited to see how much of a difference the real-time data will make.

“We look forward to seeing how well the pilot project directs resources and helps industry respond to the risk,” Mr Higgs said.

Funded by the Department of Agriculture, Fisheries and Forestry, NSW DPI and NSW Wine, this is a joint initiative with the Hub as part of the Australian Government Agriculture Innovation Program.

“This pilot project gives us the opportunity to test new technologies and systems which may help better prepare a region’s ability to respond to biosecurity threats,” Ms Cassidy said.

“It could modernise the way we approach biosecurity management and enable continuity of trade and market access for agricultural industries during a biosecurity event and beyond.”