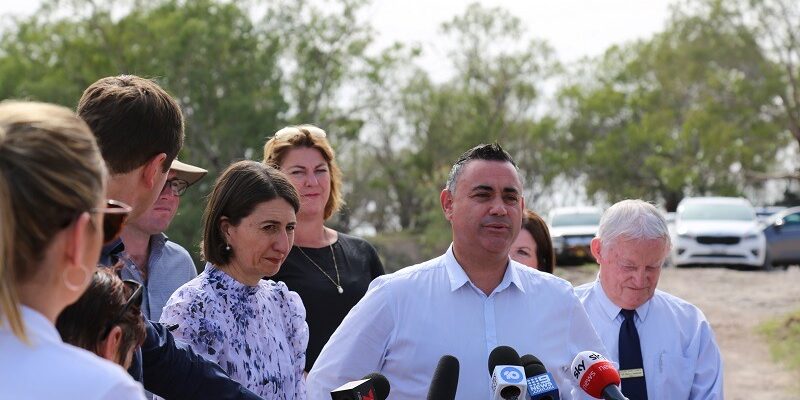 More than 30 urgent water infrastructure projects will get underway in drought-stricken communities thanks to $87 million in funding from the NSW Nationals in Government.

“The entire NSW Cabinet has now seen firsthand the severe effects of the drought, and as we look ahead at a dry summer, this funding of over $87 million for emergency water projects will help to keep our towns going strong,” Mr Barilaro said.

“These regional communities show resilience which is unparalleled, but they cannot take much more.

“As the drought worsens, this Government will do everything in its power to support regional towns and families to carry on the tradition of strong outback communities contributing to our State’s history and prosperity.

“This new funding for 30 emergency water infrastructure projects, including an additional $15 million for water carting, is on top of the extensive investment in crucial water projects and fast-tracked dams already announced by the Nationals in Government.”

“Regional NSW is the backbone of this State and we are investing in these projects to not only provide relief to drought stricken towns, but equip them for the future.”

Ms Pavey said the funding will provide much-needed relief for towns who are staring down the face of day zero.

“Flows have already ceased below Warren Weir on the Macquarie, and water releases to the Lower Namoi and Lower Darling stopped in December last year. Communities are doing it tough and need our support,” Ms Pavey said.

The $87.76 million NSW Nationals in Government investment will fund the following:

“The new $2 million bore and pipeline in Bourke, as announced by the Premier, is an example of a vital project funded through this critical water infrastructure package,” Ms Pavey said.

“We will also see current infrastructure, such as pipelines and off-stream storages repaired and maintained to ensure not one drop of precious water is wasted.”

The NSW Nationals in Government have committed more than $3 billion to drought relief and water security since 2017, which includes funding for 60 bores across 23 communities and 14 pipelines, such as that from Wentworth to Broken Hill.