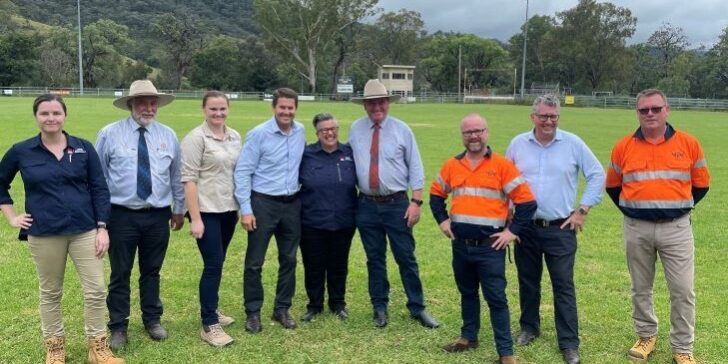 Deputy Prime Minister Barnaby Joyce and NSW Nationals Minister for Water and Member for Tamworth Kevin Anderson have announced the final business case for the Dungowan Dam will be going to the NSW Government in as little as a month.

Mr Joyce and Mr Anderson acknowledged the community has been holding out for progress and said the Commonwealth and NSW governments have been focused on getting shovels in the ground as soon as possible.

“Today we’re here at the site of the existing Dungowan Dam to announce real progress on this important piece of water infrastructure,” Mr Joyce said.

“I’ve never stopped fighting for this project, and this is a big step towards securing water security for Tamworth for years to come.”

“The people of Tamworth can trust that myself and Minister Anderson, will always fight for them whether it’s in Canberra or Sydney.

“I have been calling for progress on this project so it is a good step forward to visit the site today and announce the contractors for this significant project.”

Mr Anderson said water security for Tamworth and the Peel Valley is one step closer with the final business case having been lodged with Infrastructure NSW and Infrastructure Australia.

“Since I have taken up the responsibility of Minister for Lands and Water, I have been pushing hard to get this project moving, to get shovels in the ground and I believe significant progress has been made in regard to the new Dungowan Dam,” Mr Anderson said.

“I can now confirm the business case will be coming to the NSW Government as early as next month.

“I have given express instructions to the Department to make this happen as soon as possible and we can expect significant progress in the near future.

“This is the NSW Government hitting the go button on Dungowan Dam and finding a way to fast track this project. I know how important water is to this region and I will keep pushing forward to get shovels in the ground and start this significant project for the Tamworth region.”

Acciona and Seymour Whyte have been chosen to compete for the contract to design and build the New Dungowan Dam.

A decision on who will be the successful builder will be made later in the year after the investment decision is made.

Both companies have made a commitment to the NSW Government to employ local businesses and create jobs for local people including Aboriginal communities.