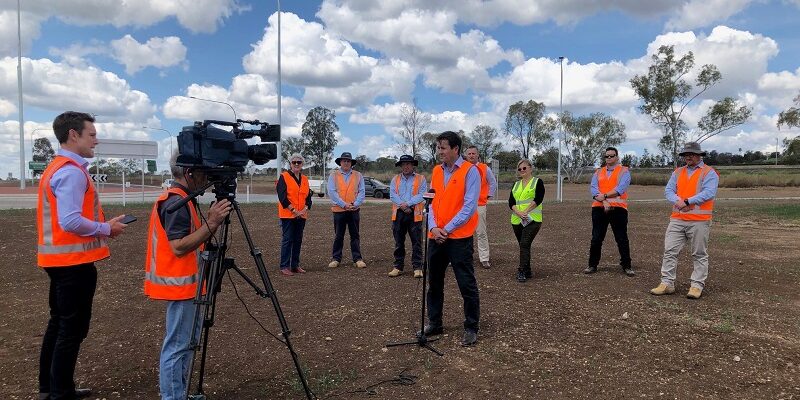 The NSW Nationals in the state government are delivering safer trips for locals and visitors in and around Gunnedah.

A new roundabout in Gunnedah is taking trucks off the main street and building on plans to ensure a better flow for freight operators, according to NSW Nationals Member for Tamworth Kevin Anderson, who said the $4.5 million project at the intersection of the Oxley Highway and Boundary Road will divert heavy vehicle traffic away from the centre of town.

“The NSW Nationals in the state government have already pumped millions of dollars into Gunnedah on various roads and other local projects with plans to continue strong investment right across the city,” Mr Anderson said.

“These projects support regional growth, economic development and liveability making Gunnedah an even more attractive place to live and invest.”

Motorists will be enjoying trips across the new Gunnedah Bridge sooner than expected, with the project to improve road safety and freight connectivity expected to open to traffic before Christmas.

NSW Nationals Minister for Regional Transport and Roads Paul Toole said work on the new 195-metre-long bridge was powering ahead, with work on the bridge deck nearing completion.

“We know Gunnedah has been a significant freight pinch point in the North West. The $61 million investment by the NSW Nationals in the state government in this bridge will fix that, allowing an uninterrupted flow of traffic for heavy vehicles through town in a big boost for productivity,” Mr Toole said.

“We’ve been pushing ahead with this project through these challenging times to ensure the community benefits from this investment faster – and we’re now on track to open the bridge to traffic months ahead of schedule.”

Mr Anderson said the bridge has already been a big boost for the local economy, creating about 60 jobs.

“The next step will be for the community to decide on a name and submissions for this will be called shortly,” Mr Anderson said.

“The community and local stakeholders will be asked to suggest names, with Transport for NSW working with Gunnedah Shire Council to review submissions before selecting the preferred name.

“The community will be given directions in the coming weeks on how to provide suggested names for the new bridge.”

Final finishing works, including the closure of the rail level crossing, remain on track to be complete in early 2021, weather permitting.