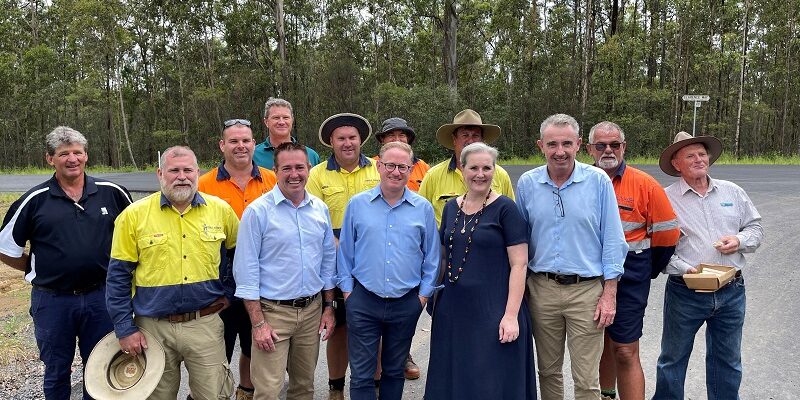 B-Double trucks are set to have unrestricted access from Grafton to the Bruxner Highway following the completion of a $7.96 million upgrade to seal the final 15-kilometre gravel section of Clarence Way.

Deputy Prime Minister and Nationals Leader Michael McCormack said the NSW Nationals in the federal government were proud to support the important upgrades that will deliver better freight connectivity for the region.

“This is what the NSW Nationals in the federal government’s $110 billion infrastructure pipeline is all about – supporting local economies, delivering efficiencies to our national freight network and getting Australians home sooner and safer.”

“Clarence Way is an important link in the regional freight network, connecting local farmers at Tabulam to markets in Queensland and south to Grafton,” Mr Toole said.

“Not only will the sealing of this uneven, gravel road prevent the products and produce moving on this road from being damaged, but it will also mean lower operating costs and increased productivity for our freight industry, and a safer road network for all road users.”

NSW Nationals Member for Page Kevin Hogan said the NSW Nationals in the federal government’s contribution of $3.55 million helped deliver the project in a huge win for the local agricultural industry.

“This project will unlock the economic potential of the Tabulam Agribusiness Precinct and allow the community to handle an increase in business activity and population into the future,” Mr Hogan said.

NSW Nationals Member of the Legislative Council Ben Franklin said on top of delivering a safer road, the project was a huge win for the local economy by creating 20 local jobs during construction.

“The upgrade to Clarence Way benefits everyone, from the growers getting their produce and stock to market, to the many employed in freight and related industries, right through to the consumers at the other end of the supply chain,” Mr Franklin said.

Kyogle Council Mayor Danielle Mulholland said the investment in this northern section of the Clarence Way would enhance connectivity for local residents and freight producers and promote tourism to the area.

“This is the first section of a much larger project of rehabilitating the Clarence Way, which has been identified in the council’s newly-released Freight and Supply Chain Strategy as an alternative freight route,” Cr Mulholland said.

The NSW Nationals in the state government’s $543 million Fixing Country Roads program aims to unlock the economic potential of regional NSW. It looks to repair, strengthen, widen and seal roads, building upon our vision for a safer, stronger regional NSW.