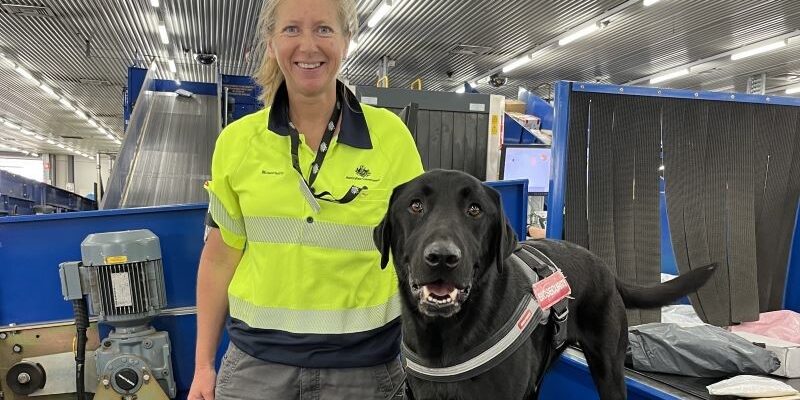 The Department of Agriculture, Fisheries and Forestry has announced biosecurity detector dog Qubit as the ‘Top Dog’ of 2022.

Acting Director of Biosecurity, Dr Chris Locke, said the department awards the ‘Top Dog’ title to a detector dog and handler team who have significantly contributed to Australia’s biosecurity efforts.

The 2022 title was given to Qubit and handler Sam for their contribution to protecting Australia against biosecurity threats including foot and mouth disease (FMD) in Melbourne Airport and the Melbourne Mail Gateway.

“Together they intercepted 126 products with the potential to carry FMD and seized 765 individual biosecurity risk items.

“In 2022 we saw the threat of FMD and lumpy skin disease grow as it was detected in our near neighbour, Indonesia.

“In response, the biosecurity detector dog program expanded the detector dog target odours to include dairy products, which have a greater risk of carrying exotic diseases including FMD.

“The department currently has 46 Labradors working as biosecurity detector dogs across Australia’s international airports, mail centres and seaports. This will increase to 62 Labradors over the next two years.

“Together, they do a great job of protecting Australia alongside the other measures we deploy to mitigate risk of exotic pests and diseases.”

Special mentions were also awarded to other biosecurity dog teams. ‘Most Versatile’ was given to Detector Dog Vespa in Sydney who, with her handlers, found the widest range of commodities (124 different commodities across her 635 individual risk items seized).

‘Rookie of the Year’ was awarded to Detector Dog Emma in Sydney who sniffed out 278 individual risk items since her graduation in August 2022. This equates to almost 3 seizures per operational workday.

Biosecurity Detector Dogs are trained to detect over 250 individual biosecurity risk items, from fruit and meat to plants and exotic pests.