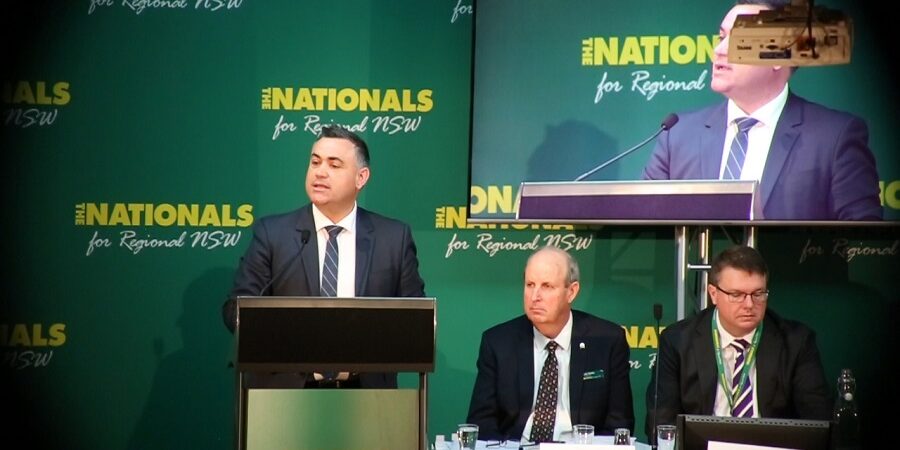 Find our why everyone’s talking about that speech with some excerpts from NSW Nationals Leader and Deputy Premier John Barilaro’s address:

Recently, I looked up the definition for the term ‘Coalition’ which states, and I quote: “A temporary alliance for combined action, especially of political parties forming a government”.

Now our ‘temporary alliance’ with the Liberals has endured and continues to do so, however… As a Party, the Nationals are a quarter of a century older than the Libs and like any older sibling we still have the ability to stamp our authority when we need to.

Yes – we fight for our fair share but rarely is it seen outside the Cabinet Room. I believe the time has come for us to be more forthright in publicly stating our views if they differ from our Coalition partner.

We are a separate Party. We have our own brand; our own identity; a rich history; traditions; values that we fight for and live by, most importantly communities that rely on us. We must be respected. We must not be taken for granted and our Coalition partners will need to work harder for our support.

The 30 per cent regional formula on asset recycling proceeds, and cost benefit ratios, a process that really was to justify spending in Sydney and metropolitan centres, should be relegated to the waste basket. No longer will we allow decisions of Government to be able to hide behind the weasel words of bean counters in treasury and process.

A good example would be the River Red Gums in Deniliquin.

An industry and community wiped out by the stroke of a pen by Nathan Rees in his dying days as Premier by creating a National Park based on green politics.

If the only way to return this industry is to carve out the resource of the National Park, then that is what we will do.

But the Liberals have not wanted to tackle this, even though it’s the right thing to do.

But I will not sit by and see a community, so unfairly dealt with, lose their livelihoods forever just because we need to avoid a public debate with our partners.

For that reason, the Nationals will be reintroducing a Bill when we return after the winter recess and we will do what we were elected to do – to make our case and convince the Parliament that this should be supported.

If the fight is worth having then we will have it, whether it’s in the Cabinet room or in the public domain, we will assert our position and I make no apology for that.

Today I say, don’t take our vote for granted, and you have no right to trade away regional NSW.

I’m also flagging that I will be seeking the support of my party colleagues, and the executive of the NSW Nationals, to consider, a decision that would not be taken lightly, but if it means I can speak more freely and achieve more for the bush, that I’m prepared to relinquish the title of Deputy Premier.

We are delivering in full, one of the most ambitious programs ever undertaken by a State Government in this state’s history, but friends the fight continues.

We will not apologise nor justify for choosing to live where we live.

We will not apologise that we will not allow our Coalition partners to trade off regional NSW to appease city moderates, lefties and the cross bench.

We will not apologise for speaking out on issues that are important to the bush, even if it makes our Coalition partners feel uncomfortable.

We will not apologise because we won’t accept the 30 per cent regional rule anymore and allow treasury bean counters to frame regional NSW through business cases and tell us what is best for us.

We will not apologise for using every conceivable measure to protect our farmers and producers from vigilantes and thugs who want to destroy our meat and dairy industry and our way of life.

We will not apologise for fighting to protect regional and rural NSW’s voice in Parliament because everyone decided to live in an apartment in Ryde.

We will not apologise because WE will build dams to future proof regional NSW and if a few frogs must go, so be it.

We will not apologise for allowing and trusting our farmers to manage their land under the Biodiversity Laws, without the fear of prosecution and being treated as criminals by overzealous government agencies.

This is not just about the Nats.

This is about every man, woman and child in regional NSW.