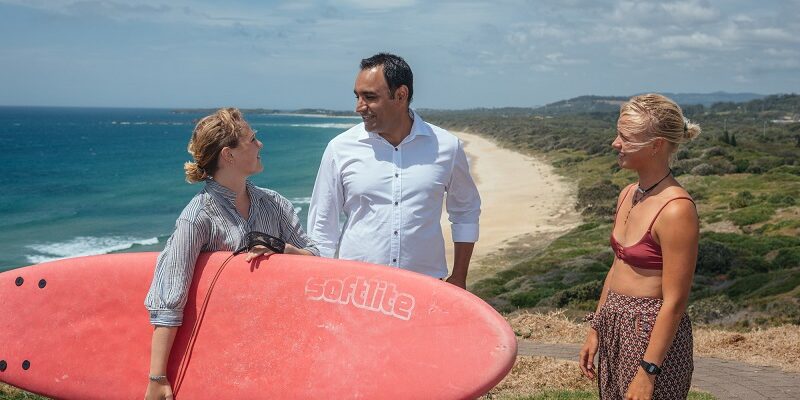 The community of Coffs Harbour will share in a total of up to $250 million in funding from the NSW Nationals in the state government to create a legacy of quality, green and accessible public space to be treasured for generations to come.

“The program will create legacy public spaces for future generations as well as keep people of the Coffs Harbour electorate in jobs to ensure the local economy keeps moving as we continue to respond to the impacts of the COVID-19 pandemic,” Mr Singh said.

“This is a great result for the local community and has been a long time in the making.”

Coffs Harbour City Council will receive the funds to acquire a parcel of land on Harbour Drive adjacent to the Jetty Strip to be used as open public space and as a gateway to the Jetty Foreshore.

Commonly known as the ‘Whale Tail land’, the 5200sqm block is situated at the eastern end of the popular Jetty Strip and stretches along the railway track from the Whale Tail sculpture to the railway station.

The funding being delivered to councils was reliant on them meeting agreed targets to speed up local development applications.

This program is the first of its kind in NSW and demonstrates state and local government working together to create a legacy of beautiful public spaces that communities, for decades, can be proud of.

In exchange for legacy funding, councils participating in the program need to speed up their assessment times. They have until June 30 to keep hitting their targets but, so far, the program has seen a 20 per cent improvement.

Coffs Harbour City Council will be provided with funding for project planning and design and will have until June 30 to demonstrate they have met DA assessment performance improvements to lock in their full allocation of funding, ahead of construction starting on projects from August this year.