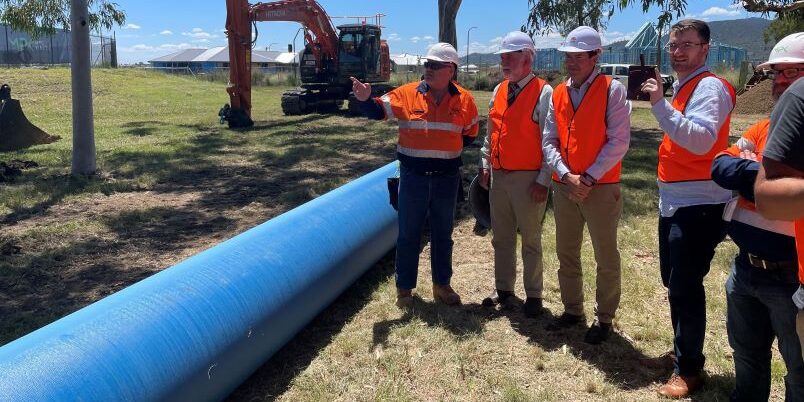 Work has begun on the New Dungowan Pipeline with Nationals Member for Tamworth and Minister for Lands and Water Kevin Anderson visiting the site to announce the pipeline is on track.

Work to complete the Stage 1 of the pipeline extends 19km from Tamworth’s Calala Water Treatment Plant to the Dungowan Showgrounds. This section of the existing pipeline is over 70 years old and frequently fails.

The full 55km pipeline will deliver greater water security for Tamworth and the Peel Valley and will connect the proposed Dungowan Dam to Tamworth’s Calala Water Treatment Plant.

Deputy Prime Minister and Federal Nationals Member for New England Barnaby Joyce said this is an enormous step for one of Tamworth’s most important projects in recent times.

“This is the day everyone has been waiting for – the work is starting, and this pipeline represents security, growth, and investment for Tamworth and the Peel Valley,” Mr Joyce said.

“Congratulations to Kevin and the Water Infrastructure NSW team for coming this far. There is still a long way to go, but myself and the Morrison-Joyce Government is behind them all the way.

“Our Government is getting the job done, building the water infrastructure Australians need to live, grow and get ahead.”

Mr Anderson said this once-in-a-generation project will improve water security for the communities of Tamworth and the Peel Valley.

“Since becoming Minister I have been working non-stop behind the scenes to deliver actual progress and today, we have dozers and excavators on the ground, dirt being shifted and pipes being installed on this critical piece of infrastructure,” Mr Anderson said.

“Starting the construction phase just two weeks after we received planning approval for this pipeline shows that I am serious about prioritising water infrastructure projects in this region.

“Not only does the construction of the pipeline provide greater water security, but it will generate revenue for 30 local businesses and support up to 70 new jobs, injecting millions of dollars into the local economy.”

Stage 1 of the Dungowan pipeline is expected to take up to 18 months to complete.

The Final Business Case for the New Dungowan Dam has been submitted to Infrastructure NSW and Infrastructure Australia for their review and is due to go before the NSW Government within the month.

The Environmental Impact Statement for the dam proposal is scheduled to go on display before the end of the year.