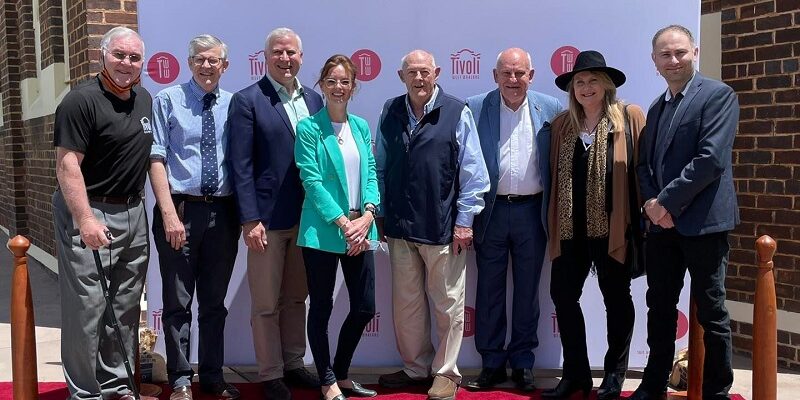 A little piece of Hollywood has returned to West Wyalong at the grand opening of the Tivoli Theatre cinema at the historic Masonic Hall.

Federal Nationals Member for Riverina Michael McCormack said he was delighted to attend the grand opening.

“The Tivoli Committee is a group of dedicated volunteers who have done so much to get to this point, and I commend everyone involved in this wonderful project,” Mr McCormack said.

“I am proud to have delivered $150,000 through the Federal Government’s Local Roads and Community Infrastructure program to such a worthwhile facility which will benefit the entire Bland Shire community.”

State Nationals Member for Cootamundra Steph Cooke said it was exciting to see the Tivoli Theatre opened to the public.

“Both the committee and the wider Bland community have had this dream of having a local theatre in the area for a long time, so I am pleased it has now become a reality with the help of over $450,000 from the NSW Government under the Stronger Country Communities Fund,” Ms Cooke said.

“The project has truly been a great way to breathe new life into the lovely historic Masonic Hall which now offers something for everyone to enjoy.”

Bland Shire General Manager Ray Smith said the Tivoli Theatre project was initiated through the community and was found to be a much-wanted facility.

“The facility will not only be a state-of-the-art cinema, it will also function as multi-purpose venue for any number of other community events,” Mr Smith said.

“This is another example of a great partnership with all levels of Government with Evolution Mine also providing a significant contribution to the project.”

Evolution Mining Cowal Gold Operations General Manager John Penhall thanked everyone whose efforts, determination and generosity had brought the theatre to life. He said its opening was an exciting milestone for West Wyalong, adding to the social life of the town.

West Wyalong Tivoli Committee Chairman Ron Cooper said the reborn Tivoli West Wyalong would bring to life the iconic name that was, from the early to mid-1900s, the hub of entertainment in West Wyalong.

“The 85-seat community cinema and theatre will carry on the rich history of its namesake,” Mr Cooper said.

“While screening the latest movies will be its core business, it will also be a multi-use venue available for hire for private functions, public meetings, art exhibitions, charity events, conferences and small musical and drama productions.”