Wagga Wagga Airport upgrade takes off thanks to Nats in Government 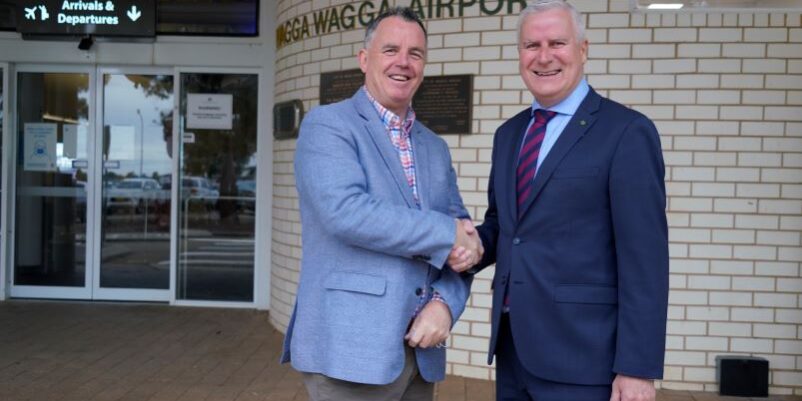 A re-elected Coalition Government will invest more than $20 million in a major redevelopment of Wagga Wagga Airport. This funding will support upgrades of the terminal, runway, and parking areas.

Nationals Member for Riverina, Michael McCormack visited the airport to announce the significant commitment towards the $24 million project.

Deputy Prime Minister Barnaby Joyce said the upgrade would allow for increased growth in passenger, aircraft and freight movements in the Riverina.

“These upgrades will further enhance the Riverina’s capacity as one of our regional powerhouses that drives the development of our nation and makes us as strong as possible as quickly as possible,” Mr Joyce said.

“The Coalition are continuing to provide the funding and infrastructure needed to strengthen regional areas like Wagga Wagga.”

Mr McCormack said the project would not only improve the airport, but also create jobs as the area continues to recover from the COVID-19 pandemic.

“I share Wagga Wagga City Council’s vision to improve the facilities at the airport, particularly as we aim to grow the city to a population of 100,000 by 2038, and today I’m pleased to be here making that commitment,” Mr McCormack said.

Terminal security screening and surveillance, runway lighting upgrades, pedestrian and parking safety improvements and general upgrades to the terminal are funded as part of project.

This investment will form part of our economic plan which is backing our regions to grow even more, and create hundreds of thousands of jobs, with more than $21 billion in the 2022-23 Budget being invested into developing Australia’s regions.

Only a re-elected Coalition Government will deliver a strong economy and a stronger future, with projects like the Wagga Wagga Airport upgrade, for residents across the Riverina.