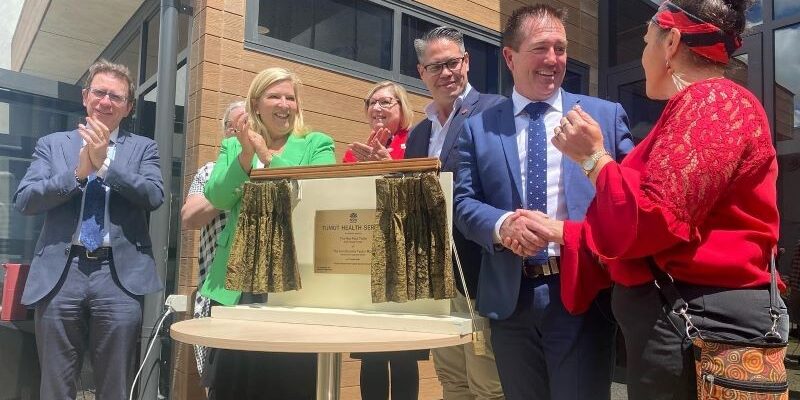 New services including a CT scanner, ultrasound and renal dialysis as well as an expanded emergency department and improved maternity services are all part of the new $50 million Tumut Hospital, officially opened today.

“With more than half of all subcontractors and suppliers based in Tumut, Wagga or Albury, this is a hospital that has been built by locals for locals.

“The NSW Government knows how critical healthcare is in the bush, and we’re backing that in with a record $11.9 billion investment towards building and upgrading our state’s health infrastructure over the next four years, with nearly a third of that being spent in the regions on more than 90 projects.

“We also know how critical is to ensure there is adequate accommodation for our regional health workforce, which is why we’re continuing to deliver on our $45.3 million commitment to roll out modern, sustainable accommodation for health workers close to health facilities in the Murrumbidgee, Southern NSW and Far West Local Health Districts.”

Nationals Minister for Regional Health Bronnie Taylor said the government’s investment in the hospital means new and additional services are now all housed under one roof, making life easier for patients, their families, and staff.

“Existing services like maternity and surgery can now be delivered in more enhanced and modern medical spaces while new services, including a CT scanner, ultrasound and renal dialysis are enabling people to access services closer to home,” Mrs Taylor said.

“The new chair-based services in particular will make a huge difference to patients, with treatment able to take place during the day, so patients won’t have to stay overnight.”

Duty MLC for Wagga Wagga Wes Fang said the new fully integrated hospital will meet the community needs of Tumut, Gundagai, Batlow and Adelong now and into the future.

“Today is a significant day for the Tumut community. I am so proud the NSW Nationals and Liberals in Government delivered this important upgrade of Tumut Hospital for the region,” Mr Fang said.

Murrumbidgee Local Health District Chief Executive Jill Ludford thanked staff and the community for their input which has resulted in new features including a quiet room for families, a cultural room, and comfortable outdoor spaces.

“We are proud of this new contemporary health facility which will improve patient experience, and help attract and retain skilled clinicians,” Ms Ludford said.

The final works stage for the project was recently completed, including landscaping, a new car park and construction of the hospital’s new main entrance via Simpson Street. Construction of the new helipad is underway and expected to open in late 2022.

Construction of on-site Key Worker Accommodation is also underway, with the 5, 1-bedroom units being fast-tracked and scheduled for completion in early 2023. The project is part of the NSW Government’s $45.3 million commitment to deliver modern, sustainable accommodation for health workers close to health facilities in the Murrumbidgee, Southern NSW and Far West Local Health Districts.

Other major projects in Murrumbidgee Local Health District include:

• the completed $431 million redevelopment of Wagga Wagga Base Hospital
• the $250 million Griffith Base Hospital redevelopment expected to be completed by 2025
• A new ambulance station is nearing completion at Tumut Hospital under the NSW Government’s $232 million Rural Ambulance Infrastructure Reconfiguration (RAIR) program.