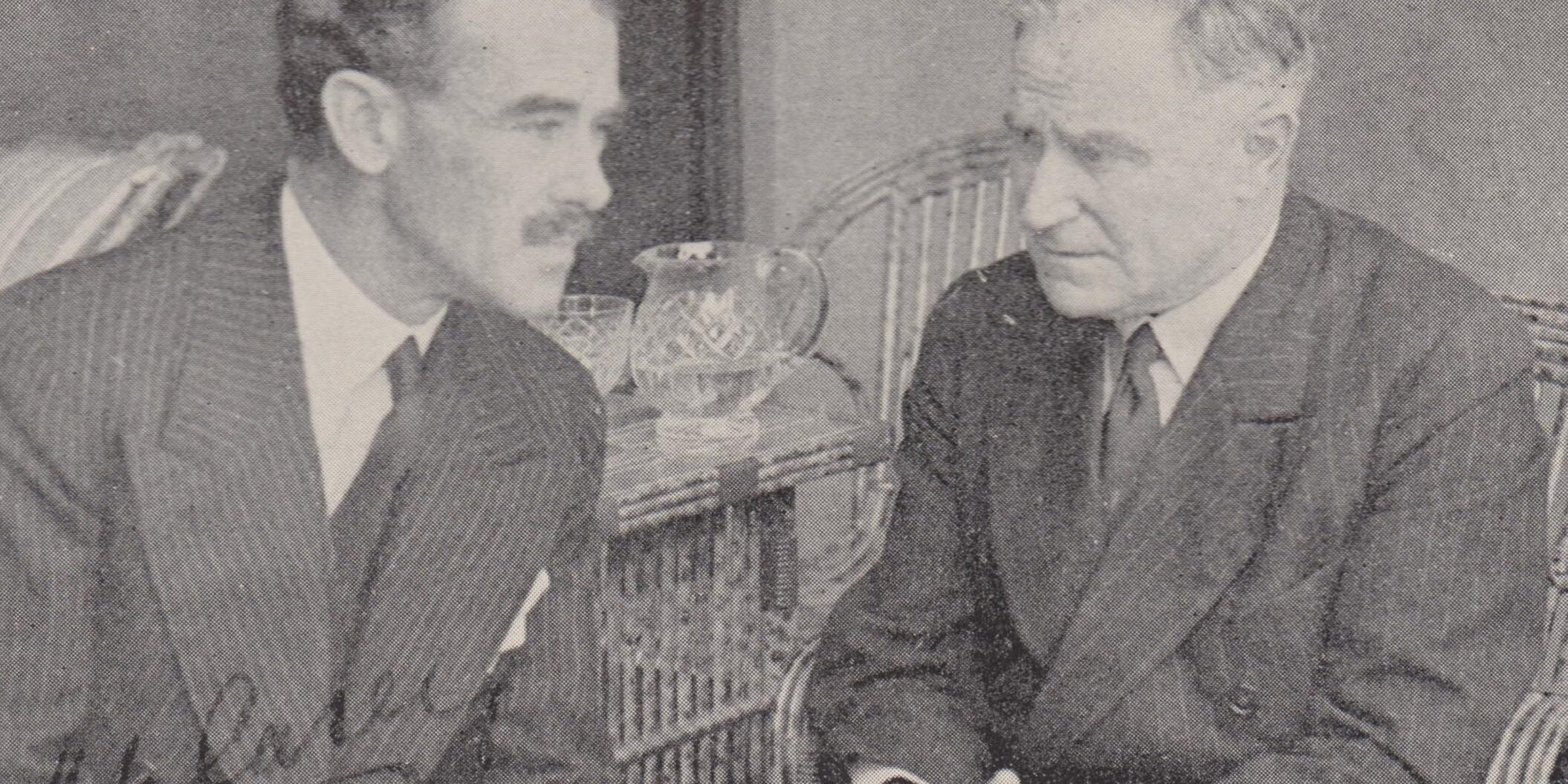 Sir Earle Page was one of the founders of the Country Party of Australia, which went on to become the National Party.

Sir Earle, who served briefly as Prime Minister in 1939, was the third longest-serving M.P in Australian history, spending just shy of 42 years in the parliament.

The Sir Earle Page Memorial Trust, through its charitable activities, awards an annual scholarship to a deserving young student from regional NSW, giving them the opportunity to undertake a degree at the University of Sydney. Three such scholarships have already been awarded.

Unfortunately COVID-19 forced the cancellation of the 2020 and 2021 lectures.

The good news is that the lecture will take place in 2022 – on Thursday, February 24.

General Sir Peter will talk about his life of service – from commanding a rifle platoon in Vietnam to becoming Australia’s 26th Governor-General.

Official invitations will be sent shortly.

Ahead of the Sir Earle Page Memorial Trust Lecture, National Party historian Paul Davey looks at the life and career of Sir Earle.

The Coalition Government between the United Australian Party (UAP) and Australian Country Party (ACP) faced a calamity on Good Friday 1939 that no previous government had experienced: the Prime Minister, Joe Lyons, died suddenly and unexpectedly from heart failure shortly before 11am.

Complicating matters, the UAP had not met to elect a new deputy leader, following the resignation of Robert Menzies on March 14 (coincidentally the same day Hitler began his invasion of Czechoslovakia) in protest at the government’s handling of a proposed national health and pensions insurance scheme. Menzies had also resigned as Attorney-General. Now the UAP would also have to elect a new leader.

Who should be Prime Minister in the meantime? The Acting Prime Minister and Country Party leader, Earle Page, convened an urgent meeting of those ministers who were in Sydney on that Good Friday morning – nine altogether.

The former Labor and Nationalist Prime Minister and Attorney-General, Billy Hughes, suggested that Page, as the second most senior member of the government and the Acting Prime Minister, should advise Governor-General Lord Gowrie to commission him to form a government with full authority. Hughes stressed the need for full authority, as opposed to caretaker capacity, because the critical and uncertain international situation could require urgent national decisions to be made.

The meeting agreed and Page spoke with Lord Gowrie, who accepted the advice and, as Page recalled in his memoirs: “I proceeded immediately to form a government. The Country Party and the UAP maintained their alliance and I made no changes in the Cabinet.” Page intended to remain Prime Minister until the UAP chose a successor to Lyons.

The UAP leadership vacancies presented a further problem for Page: if Menzies were elected UAP leader, and therefore Lyons’ successor as Prime Minister, Page would not serve in his Cabinet. He was no fan of Menzies. The two had clashed over national insurance and Page had been astounded that Menzies would pull the pin on his deputy leadership and as the third most senior minister in the government when the world was inexorably heading towards war.

Page had been born in Grafton, NSW, in August 1880. He became a doctor and surgeon, establishing his own practice in Grafton and serving in the Australian Army Medical Corps for six months in 1916 in Egypt and then with the No. 3 Australian Casualty Clearance Station in France from October 1916 to March 1917.

He was also a cattle producer, newspaper proprietor and strong advocate for a NSW Northern New State.

By 1919 he decided he could best serve the interests of northern NSW and the broader country community by entering politics. He won the seat of Cowper, centred on Grafton, at the election on December 13, 1919, and was a founding member of the ACP, which was established on January 22, 1920.

After the election in December 1922, Page, by then Country Party leader, and the UAP’s Stanley Bruce, forged the first post-Federation Coalition agreement between the non-Labor parties, establishing a government which held office until October 1929.

Under the Bruce-Page agreement, which formed the basis of future Coalition agreements to this day, the two parties maintained their independent identity and Page, who became Treasurer, was recognised as the second most senior member of the government and the Acting Prime Minister during Bruce’s absences. He was effectively the Deputy Prime Minister, although that title did not exist until being established by Prime Minister John Gorton in January 1968.

By the time of Lyons’ death, Page had accumulated some 18 months experience as Acting Prime Minister.

His immediate priority as Prime Minister was organising memorial and funeral services for Lyons. Lyons’ body lay in state at St Mary’s Cathedral, Sydney, on Easter Monday. The next day, after a Requiem Mass and a funeral procession to Circular Quay, it began its final journey aboard HMAS Vendetta, to Tasmania and burial in Lyons’ hometown of Devonport.

In the ensuing days, Cabinet appointed a new Commissioner and Deputy Commissioner of Taxation, referred a report on the establishment of a cable manufacturing factory to a Tariff Board inquiry, and requested the Minister for External Affairs to prepare a white paper on the deteriorating international situation.

Page explored the possibility of establishing an all-party national government under the leadership of Stanley Bruce, who was at the time in Los Angeles. The Parliamentary Country Party, meeting on April 18, 1939, supported the concept and agreed that it was “definitely unable to co-operate in a government with the Hon. R. G. Menzies, K.C. as its Prime Minister, nor is it willing to give any undertaking to support such a government if it be formed”.

The UAP, also meeting on April 18 and aware of the Country Party resolution regarding Menzies, nonetheless elected him as its new leader.

On April 20, Page addressed the House of Representatives, advising that he would tender the resignation of his administration to the Governor-General in the afternoon. He then seriously questioned Menzies’ suitability to lead the nation, saying that the government needed a leader with the “three essential qualities of courage, loyalty and judgment” to “secure the greatest possible measure of co-operation in the community”.

Page had shown a draft of his speech to a few close colleagues, all of whom advised against attacking Menzies. But Page persisted, resulting in four MPs, including Queenslander, Arthur Fadden, quitting the party room and sitting as Independent Country Party members. It took Page’s resignation as party leader on September 13, 1939, in the interests of ensuring co-operative government – Australia having joined Britain in declaring war against Germany on September 3 – to reunite the party and begin healing the UAP/ACP relationship. The Coalition, which had broken on April 26, 1939, was re-established from March 14, 1940.

Page’s political career, however, was far from over. Arthur Fadden, as Prime Minister in September 1941, nominated Page as Australia’s ministerial envoy to London, an appointment that was reconfirmed by John Curtin on Labor’s assumption of office from on October 7, 1941.

Despite the antipathy between Page and Menzies, the latter recognised his political value and appointed him to senior ministerial roles in his governments from December 1949 to January 1956. During that time, Page, as Health Minister, introduced free medicine for pensioners and developed the first national health service.

Page never knew that he had been defeated by Labor in Cowper at the election on December 9, 1961, after 42 years as the local member. He died a few hours before the declaration of the poll.

From being a founding member of the ACP and its first parliamentary secretary and whip, to establishing the Australian Country Party Association – today’s Federal Council – from September 1926 and being its president until his death, and to assuming the prime ministership in unique circumstances, Earle Page was undeniably a doyen of what is today’s National Party of Australia.