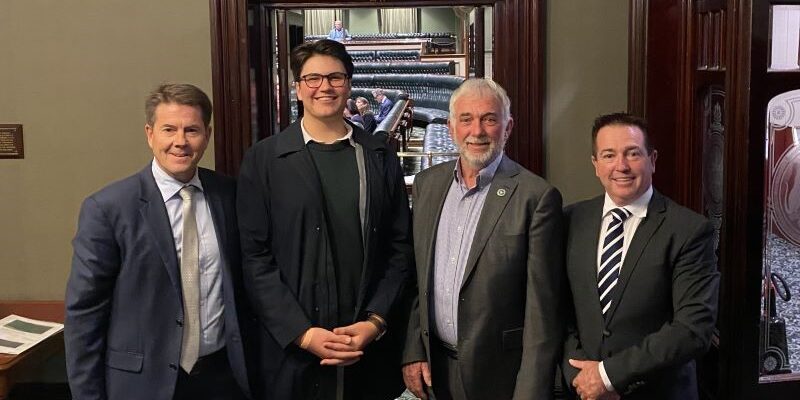 Tamworth’s Youth Council has had a representative in the NSW Parliament this week with Deputy Mayor Jack Lyon taking up the opportunity to gain experience in the office of the Minister for Regional Youth Ben Franklin.

Nationals Member for Tamworth Kevin Anderson took Cr Lyon on a tour of the parliament after Question Time, giving him an opportunity to meet MP’s and their staff.

“Jack’s been a strong advocate on behalf of Tamworth’s youth as part of his role as Deputy Mayor on the Youth Council,” Mr Anderson said.

“Along with his fellow councillors, he is driving some great initiatives for the benefit of our community and this week was a great opportunity for him to learn from some of our state’s leaders, including Deputy Premier Paul Toole and the Minister for Regional Youth Ben Franklin.”

Cr Lyon said the visit was another opportunity to advocate on behalf of the region’s young people.

“When Ben Franklin came to Tamworth, we hit it off. I told him I wanted to get into politics, and he said, ‘you’ve got to come down for work experience’. It’s really exciting,” Cr Lyon said.

“Recently, the Youth Council put forward a Youth Action Plan to get youth back in focus, making sure we don’t get left behind.

“What we want to do is provide a list of 8 actions following the 2020 youth Regional Framework released by the NSW Government, which has four pillars: Work ready, wellbeing, connectivity, and community.

“It’s been a tough time for youth in Tamworth and they need more support than ever before.”

The NSW Regional Youth Action Plan was developed in consultation with youth from across regional NSW and is available here.

“I know that Jack’s experience will serve him well as he continues his advocacy on behalf of his peers. It was great to have him in Sydney this week and we look forward seeing where his experiences in the council and the NSW Parliament take him,” Mr Anderson added.