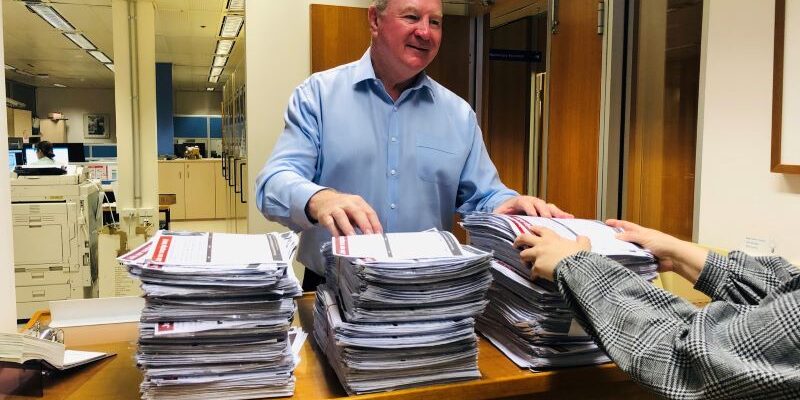 Today I am announcing that I am retiring from Parliament at the next election after serving as MP for the Myall Lakes since 2011. I will be taking more time to focus on my family after having served the community for 12 years across three terms.

It has been a true honour to represent the Myall Lakes in Parliament having made more than 1,400 speeches, responses and questions in which I have fought for our community for over a decade. I’m proud that in that time I have secured hundreds of millions of dollars of funding for the region that have made a marked difference.

I have been so fortunate to celebrate more than one hundred 100th birthday’s, countless anniversaries and other outstanding community achievements with those in the Myall Lakes.

I would like to thank our community for your support during my term, especially the volunteers for your incredible backing. I thank the National Party and my colleagues in Parliament as we continue to deliver for Regional NSW.

Last but not least, I thank my family and wife Sue for being by my side during this proud time of my life. I believe I will step down having left the Myall Lakes in a far stronger position than when I took office in 2011, but now it is time for me to turn my focus to my family after a difficult few months with my health.

Notable highlights and changes to the electorate include:

• Securing $140 million funding to upgrade to Manning Base Hospital which has resulted in a new Oncology Unit, renal dialysis unit and medical imaging unit. Stage Two upgrades will include improved patient accommodation and an improved intensive care unit.
• $20 million funding for a hospital in Forster
• A new $19.4 million police station in Taree
• $2.5 million funding for First Steps Count which will be a game-changing facility for young families in the region
• State of the art rowing club in Taree thanks to more than $600,000 from NSW Nationals in Government
• $8.2 million for Iron Arena which is set to be the region’s largest sporting and entertainment venue. The funding has come from the Bushfire Local Economic Recovery Fund (BLERF) which is co-funded by the NSW Nationals in government and the Commonwealth Government
• Upgrades at Cundletown interchange on Pacific Highway which are jointly funded by NSW Nationals in government and the Commonwealth Government with $15 million
• $600,000 for Great Lakes Women’s Shelter for the construction of a brand new shelter to protect women and children
• $3 million Forster-Tuncurry golf course
• Millions of dollars for local Surf Life Saving Clubs
• Two new ambulance stations in Old Bar and Forster in addition to upgrades to the current ones in Taree and Tuncurry
• Millions for local sports and community groups