Shooters join Labor and Greens to sell out regional NSW 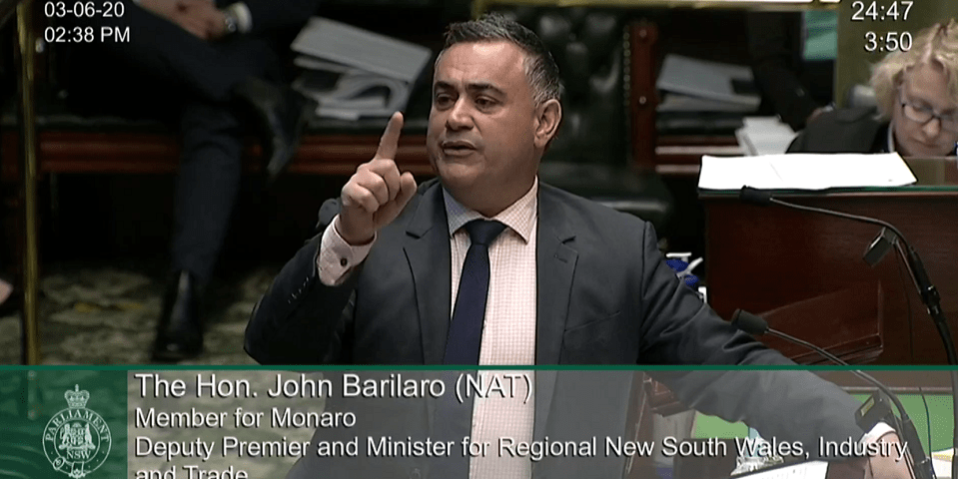 Deputy Premier and NSW Nationals Leader John Barilaro has slammed the Shooters’ Party for their hypocrisy and double standards exposed in the debate over the coal seam gas moratorium private member’s Bill.

“This week, the Shooters have truly been exposed for the frauds that they are – they plan to preference the Labor Party in the Eden-Monaro by-election, and now they are in lock-step with Labor and the Greens to destroy jobs in far western NSW, with this push for a moratorium on coal seam gas mining,” Mr Barilaro said.

“The Shooters pretend to back regional NSW and the issues that matter to our communities, but they quickly turn their back on the regions to do a deal with Labor and the Greens.

“Their agenda is undeniable, and it is not in line with supporting the interests and wellbeing of regional NSW. How can they look at regional communities with a straight face?”

The Santos project at Narrabri will undergo a rigorous assessment by the Independent Planning Commission. If approved, the project would create 1300 jobs during peak construction, 200 operational jobs and 500 direct and indirect jobs for the region.

Furthermore, the gas provided by the project is expected to lower energy prices in NSW, allowing greater certainty for the manufacturing sector.

But on the very day the Federal treasurer declared Australia was in a recession because of the coronavirus pandemic, the Shooters joined Labor and the Greens in voting against – not for – jobs.

“While this Government works to deliver and secure hundreds of jobs so desperately needed in our regions, the Shooters are taking potshots in Macquarie Street, sidling up to Labor, the Greens and Independent Justin Field to destroy those good-paying jobs before they are even created,” Mr Barilaro said.

“Mark my words, the people of Regional NSW will never forget the day the Shooters traded their jobs in a deal with the Greens – and I won’t let the Shooters get away with this.”