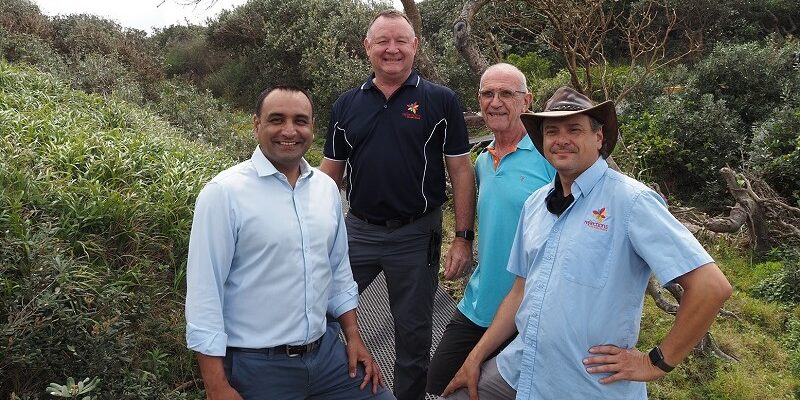 The headland walkway in Red Rock Reserve north of Coffs Harbour has been restored to its former glory thanks to the NSW Nationals in the state government in partnership with Reflections Holiday Parks and the local community.

In February this year, Reflections was successful in receiving a $32,000 grant from the NSW Nationals in the state government’s Crown Reserves Improvement Fund, with the money going towards repairing and replacing the walkway from the Reserve area to the beach and headland.

The company made a further contribution of $9,000, and the project was recently completed, with assistance from the local community, in time for the warmer months leading into the busy holiday season.

* Cutting back overgrown vegetation for a clearer and safer path
* Removal of the existing rotted timber slats and repairs to damaged bearers
* Installation of a non-slip ‘Envirowalk mesh’ with safety stair nosing at the steps, and
* Vegetation management by Red Rock Landcare

Nationals Member for Coffs Harbour Gurmesh Singh and representatives from Reflections, Red Rock Landcare Group, and the Red Rock Preservation Association took a stroll along the walkway to inspect the works and celebrate this achievement.

“In many cases, important community projects such as the Red Rock Walkway repairs would not happen without state funding which significantly contribute to NSW’s cultural, sporting and recreational life,” Mr Singh said.

Red Rock Preservation Association and Landcare Representative Les Windsor said local volunteers who are passionate about the Reserve worked on the revamp.

“The Red Rock Landcare Group have a working bee at the Reserve every Tuesday, and we take pride in this natural picturesque landscape that people visit for a laid-back vacation escape,” Mr Windsor said.