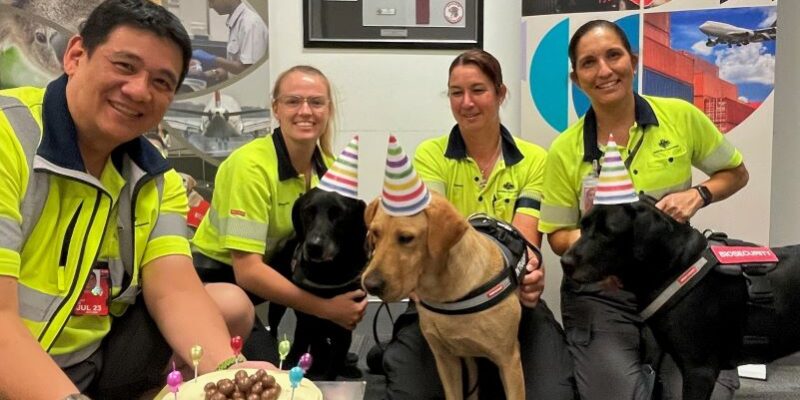 Secretary of the Department of Agriculture, Water and the Environment and Australia’s Director of Biosecurity, Mr Andrew Metcalfe AO, said detector dogs have become a critical part of the department’s biosecurity detection capability.

“The first barks about employing biosecurity detector dogs in Australia took place in 1991 when the department, in consultation with the US Department of Agriculture, developed a pilot detector dog program,” Mr Metcalfe said.

“In 1992 our first biosecurity detector dog teams started operations in Sydney and Brisbane, with the first beagle reporting for duty at Darwin airport in 1996.

“Beagles were the first dogs to be employed by the detector dog program and were used as passive response detector dogs, in the airport and seaport environments.

“The department introduced Labradors into our biosecurity operations in 2009.”

Today, detector dogs are deployed across Australia’s international airports, with the current workforce of 42 dogs and 43 operational handlers set to expand by the end of 2022.

First Assistant Secretary of Biosecurity Operations at the Department, Colin Hunter, said our world-class detector dog program is fast, mobile, and effective at detecting biosecurity risks in the mail, traveller, and cargo environments.

“The dogs have become an invaluable element of Australia’s extensive biosecurity system in ensuring compliance in travellers and sniffing out difficult to detect biosecurity risks and we are continuing to expand their capabilities,” Mr Hunter said.

“Most recently detector dogs have been trained to sniff out the scent of brown marmorated stink bug, one of our top priority plant pests.

“Last financial year the detector dogs seized approximately 16,000 biosecurity risk items. The three most-detected items included meat, seeds and fruit which could all carry pests and diseases that would seriously harm our environment, agricultural industries, and economy if they were to establish here.

“The howling success of our detector dog program in helping to protect Australia from exotic pests and diseases over the past 30 years is definitely paws for a celebration. It is exciting to think about where the program may be in another 30 years!”

1991: Australia contracted a detector dog trainer from the US Department of Agriculture to help develop a pilot program in Australia

2002: After ten years of operation the program had expanded to 26 teams including six teams undertaking state government biosecurity work

2009: Labradors were introduced into airport and seaport operations. Until this time only beagles were used as passive response detector dogs in these environments

2021: Detector dogs took in trials to screen passengers for COVID-19.