One million kilograms of emergency fodder for flood-affected farmers 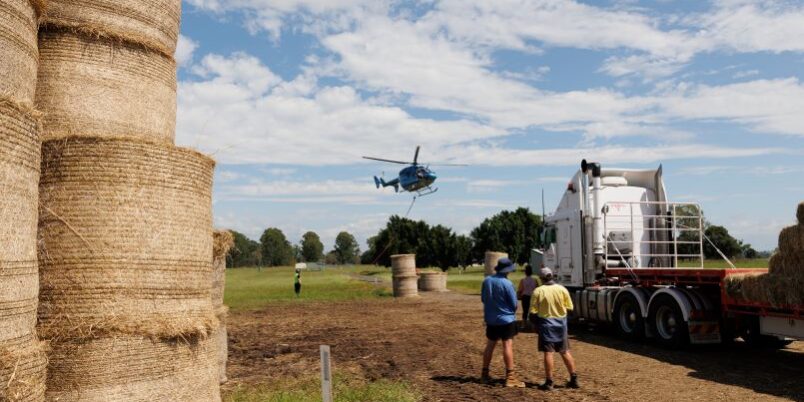 More than one million kilograms of fodder has made its way to flood-affected farms in the Northern Rivers to help impacted primary producers feed their livestock.

“Many farmers hit by these record floods have not only lost their homes, but also their livelihoods – and we’re throwing every resource at helping them get back on their feet as quickly as possible,” Mr Toole said.

“Primary producers across the Northern Rivers face a long road to recovery, and this fodder – currently being sourced from the NSW Northern Tablelands and North West regions – will make a real difference on the ground right now.

“Already, more than one million kilograms of fodder has touched down in places like Lismore, Casino and Grafton, including about 135,000 kilograms of that delivered by air to places with limited access.”

“The full extent of the damage from these floods is yet to be revealed, with communities still underwater and livestock and crop inspections still to be conducted,” Mr Saunders said.

“That’s why I urge landholders to register with the hotline so we know where support and assistance is required, without them risking their safety.”

As floodwaters recede and transport routes open up, additional emergency fodder distribution points will be established.

Farmers and community members are also urged to report stranded, lost, injured or deceased livestock to the hotline so these animals can be assessed, attended to, or removed.

The 1800 814 647 hotline is jointly run by the Department of Primary Industries (DPI) and Local Land Services (LLS) and continues to receive a large volume of calls.

A dedicated email has also been created for the hotline with land holders now able to lodge requests by emailing aasfa@emergency.dpi.nsw.gov.au