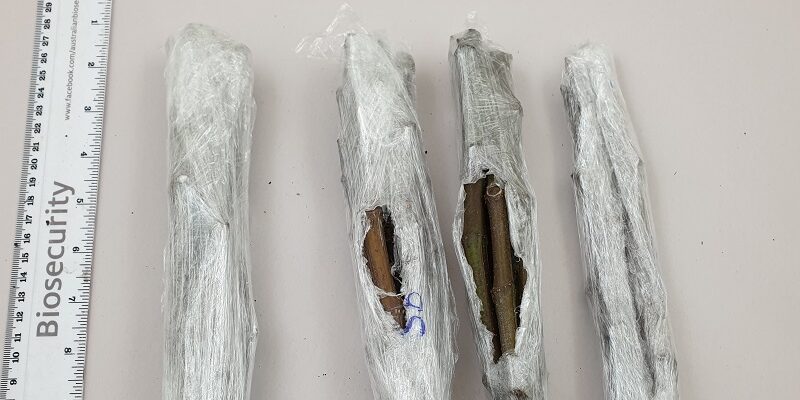 Head of Biosecurity at the Department of Agriculture, Water and the Environment, Andrew Tongue, said importing plants carried a huge risk of diseases.

“Roses are a host for Sudden oak death and Xylella fastidiosa, both of which could be absolutely devastating to Australia’s horticulture and ornamental industry, and our native species and forestry, if they were to ever establish here,” Mr Tongue said.

“This is also not the first time we have intercepted Xylella host plants through the mail, with live asparagales shrub plants and fig cuttings intercepted at Sydney Gateway Facility earlier this year,” Mr Tongue said.

“There is no cure for Xylella. It is Australia’s number one priority plant disease risk and is a threat to many industries, including cherries, citrus, tree nuts, production nurseries, summer fruit, olives and viticulture.

Xylella has destroyed olive groves in Italy that are centuries old, and it infects hundreds of species in 98 plant families. The economic costs of

Xylella to Europe have been estimated in the billions of Euros. In Australia, the potential economic impact to the wine industry alone has been estimated at $2.8 and up to $7.9 billion over 50 years.

“Not only does it attack commercial varieties of plants, but it’s also a serious threat to native plants and can cause disease in more than 500 different plant species,” Mr Tongue said.

“Sudden oak death is another harmful plant disease that is killing trees in the millions across Europe and North America. It affects over 130 tree and shrub species, including roses, and poses a risk to fruit and nut trees, ornamentals and native plants.”

In order to lawfully bring live plants into Australia, you must have an import permit issued by the Director of Biosecurity and meet all conditions within the permit.

“We’ve seen the widespread damage caused by COVID-19 – it goes without saying that the same would apply in the plant or animal populations if a disease such as Xylella were to catch hold.”