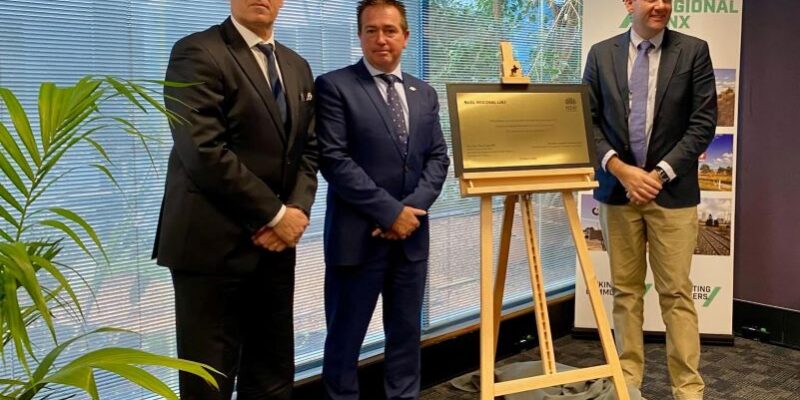 Mr Toole said UGLRL is delivering on its promise for a new regional head office and purpose-built Network Control Centre as part of its $1.5 billion contract to operate and maintain the Country Regional Network (CRN) on behalf of Transport for NSW.

“The CRN is the backbone of NSW’s regional rail network for all our customers, from our rail passengers to farmers and industry, and to open the headquarters in Orange builds on NSW Government’s vision to deliver more jobs and major infrastructure in the regions,” Mr Toole said.

“In a win-win for Orange, part of the former NSW Department of Primary Industries building in Kite Street, is now a rail operations and maintenance hub, with 75 UGLRL staff working from the new headquarters.”

Mr Farraway said the team will be managing the CRN, which comprises 2,400 kilometres of operational rail lines and 3,000 kilometres of non-operational corridors, 1,300 level crossings, more than 900 bridges, and 1,200 property assets such as stations.

“The NSW Government has worked closely with UGLRL to ensure that not only will operational performance measures be met and exceeded but the positive impact of increased regional employment in our communities is realised,” Mr Farraway said.

“Other major depots on the CRN will be maintained by UGLRL in Bathurst, Dubbo, and West Wyalong and satellite depots in Queanbeyan, Narrabri and Tamworth.”

UGLRL CEO John Pistak said Orange was a great choice for the new headquarters not only because it is a vibrant city, but because it is situated on the CRN.

“Orange is strategically located along the CRN between numerous major depots and we identified this early on as the best place to establish the hub of our operations,” Mr Pistak said.

“We felt it not only logical, but very important to have our people living and working on the CRN.

“Orange is a vibrant and rapidly growing city that has welcomed us with open arms and we are very excited to be establishing our headquarters here.”

Most of UGLRL’s controllers have taken a career in rail for the first time and almost all are sourced from the Central West.