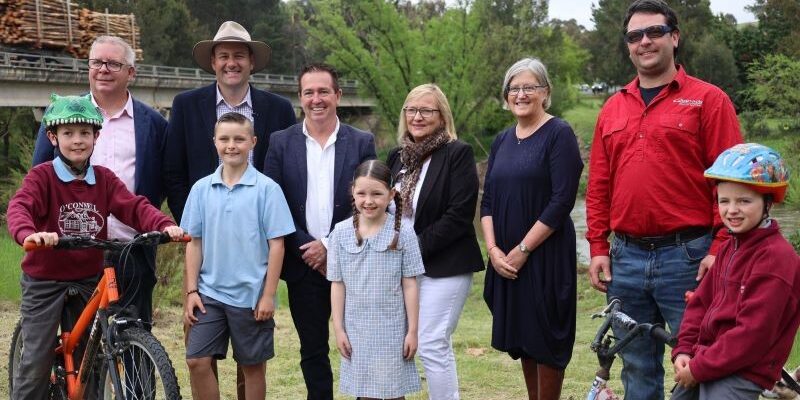 The NSW Nationals in the state government have committed to designing and building a bridge to provide pedestrian and cyclist access across the Fish River in O’Connell.

Deputy Premier and Member for Bathurst Paul Toole said the decision was a major win for the community after a local campaign for safer access to cross the Fish River, especially for young children on their way to and from O’Connell Public School.

“O’Connell Road provides the quickest route between O’Connell Public School and O’Connell, with the next closest crossing adding around nine kilometres to the journey, so there is a real need to make the journey safer for young students who are walking to and from school,” Mr Toole said.

“The design will include new shared paths to the proposed bridge to better connect residents walking and cycling from the village of O’Connell to Hassall Park and across to O’Connell Public School.

“Once complete, students will no longer need to walk or cycle in the travel lanes across the bridge, making the school commute safer and giving parents peace of mind.”

Nationals Minister for Regional Transport and Roads Sam Farraway said the existing bridge was built in 1984 with no shoulder or path for pedestrians and cyclists.

“The area is popular with cyclists and we want to make it safer for them when crossing the river so they are not sharing the roads with cars, buses and B-double logging trucks,” Mr Farraway said.

“The existing bridge at the bottom of a 1.3 kilometre descent from Bathurst currently has no separate shared pathway for pedestrians and cyclists.

“Work is now under way to look at options to construct pedestrian and cyclist access across the river.

“Our Government is building what matters to the community so that we can continue to build a brighter future for the people of NSW.”