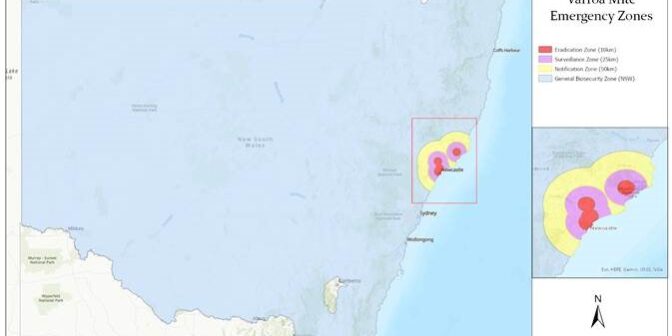 Another biosecurity zone has been set up in NSW after varroa mite was discovered in bee hives at three more properties.

Nationals Minister for Agriculture Dugald Saunders says the move accounts for an infested premises, which is located outside the existing zones.

“Since Friday, when we established the three tier response areas, and the subsequent state-wide emergency order, we’ve seen a new report at Bulahdelah on the NSW Mid North Coast,” Mr Saunders said.

“This means a new 10km eradication zone, 25km for surveillance, and an extended 50km biosecurity zone have been implemented, to rapidly shut down that new incursion and stop further spread.

“Critically, this case is directly linked to a previously identified property, which shows the prompt and efficient response by the Department of Primary Industries is working well.”

The other two new cases identified this morning are located at Newcastle and at Seaham.

“I want to be clear that the expansion of the biosecurity zones is no cause for alarm, but actually shows the surveillance system is doing its job to stay on top of where this parasite is hiding,” Mr Saunders said.

“I would like to encourage all beekeepers, both commercial and recreational, within the new or original impacted areas to please come forward for the good of the industry.

“We know the devastating impacts varroa mite will have on our honey supplies and pollination across the state, if this threat is not stopped.

“The best path forward is to report the locations of potentially impacted hives to aid our response, so we have all the information we need to deal with this as swiftly as possible.”

A total of seven infested premises have now been discovered through contact tracing, including the initial detection at sentinel hives near the Port of Newcastle.

DPI is working closely with industry and will hold a briefing with them on what the eradication process will look like. These next steps will be finalised in the coming days.