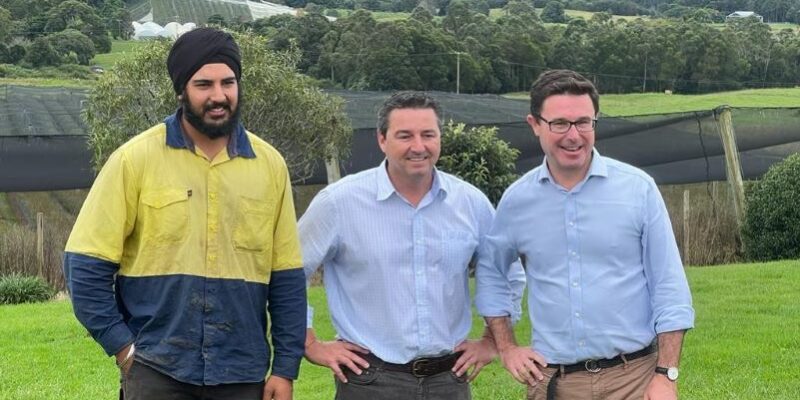 Federal Nationals Member for Cowper Pat Conaghan says the expansion of the Horticultural Netting Program – Trial will benefit horticulture producers across the electorate.

The rollout of the program follows the signing of a funding agreement with the NSW Government.

Nationals Minister for Agriculture and Northern Australia David Littleproud and Mr Conaghan have announced the program funding in Coffs Harbour.

Mr Conaghan said the expansion of the Horticultural Netting Program – Trial will see improved productivity and farm gate returns for horticulturalists in the Cowper electorate.

“Properly installed netting can seriously improve both the quality and quantity of fresh food crops, while reducing water usage by up to 30 per cent.

“Recent research has proven that it can reduce the damage from severe weather impacts and can also keep out animals that damage horticulture crops, like birds and flying foxes.

“The value added for growers by programs like this will help the agriculture industry to become a $100 billion sector by 2030.

“I am pleased that the finalisation of the funding agreement will see $5.9 million in Australian Government funding provided to New South Wales producers.”

Mr Littleproud said the program would be a huge benefit for the horticultural producers of NSW.

“With New South Wales’s inclusion in the expanded program, we will be better placed to protect our industry for whatever the future may bring.

“By conserving water and minimising damage from bad weather, we’ll be future-proofing our industry from the shocks and impacts of climate change.”

More information about the Horticultural Netting Program – Trial Expansion in New South Wales will be provided by the New South Wales Rural Assistance Authority prior to the commencement of the program.