Nats in government support Boys to the Bush with $10,000 grant 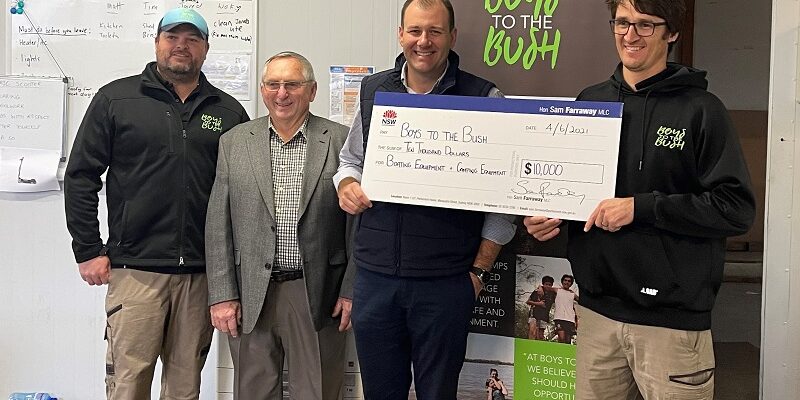 The NSW Nationals in the state government have given a $10,000 grant to support the Boys to the Bush organisation.

NSW Nationals Upper House MP Sam Farraway was in Forbes on Friday to present the grant on behalf of Regional Youth Minister Bronnie Taylor to Boys to the Bush to support their community outreach program.

Boys to the Bush aims to encourage mateship, resilience, and a sense of belonging, allowing boys to be surrounded by positive influences and giving them opportunities to succeed.

Their slogan is: “It is easier to build a strong boy than repair a broken man”.

Mr Farraway said the $10,000 grant will be used to purchase a new boat, portable fridges, and boating and camping equipment to support the work of Boys to the Bush with vulnerable youth within the Central West.

“After visiting and speaking with Tim West, program coordinator for Boys to the Bush in April, I was able to see first-hand the outcomes this organisation was achieving for local youth in the Forbes and Central West region,” Mr Farraway said.

“After meeting with Minister Taylor, we both share the admiration for the work Tim and his team are achieving. I’m delighted to present Boys to the Bush with a grant of $10,000 to support their camps and outreach programs.”

Buy regional and get the bush buzzing this Christmas
02 Dec, 2021
Recent Posts
Go to Top