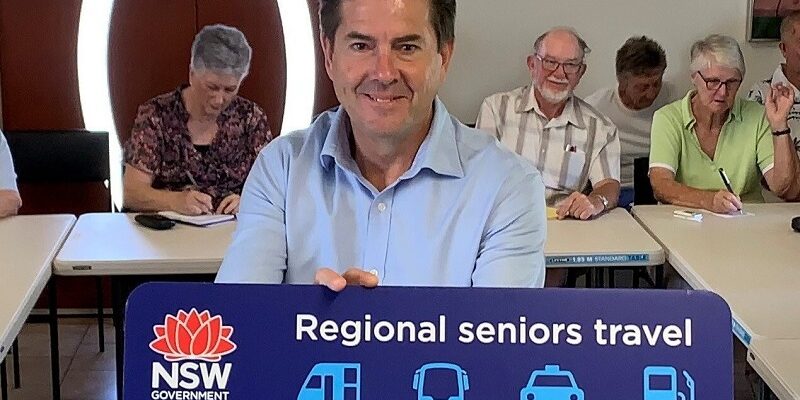 More than 300,000 people across NSW have signed up for the Regional Seniors Travel Card, just three months after the 2nd round of applications opened.

NSW Nationals Member for Tamworth Kevin Anderson said it was fantastic to see the keen response to the $250 pre-paid Visa card, which benefited more than 337,500 seniors and their communities in 2020.

“The card has been an overwhelming success, last year easing the burden of just under 4000 local seniors,” Mr Anderson said.

“Already in year two of the trial, 7735 applications have been received across the Tamworth electorate.

“This card is great news for regional seniors and another way we are injecting money into the bush with the benefit flowing for fuel stations, taxi drivers and local economies.”

NSW Nationals Minister for Regional Transport and Roads Paul Toole said it was exciting to see such high interest in the second year of the trial, which puts $250 into the pockets of eligible seniors to spend on pre-booked TrainLink, regional train and coach services, fuel, and taxis.

“We know how much seniors value this card – it can mean the difference between an extra few trips to visit grandkids, the ease of seeing friends locally or just getting to the shops or attending medical appointments,” Mr Toole said.

“The card injected more than $60 million into regional economies in the first year of the trial, putting money in local cash registers at a time when it was needed the most.

“Not only is this card a game changer for regional seniors, it’s another way we are injecting money into the bush with the benefit flowing to fuel stations, taxi drivers and local economies.”

Eligible seniors have until November 30, 2021 to apply online at www.service.nsw.gov.au, by calling 13 77 88, or by visiting a Service NSW Service Centre.